U.K.-based designer and director has worked with agencies such as Wieden+Kennedy and Droga5 to create full-scale campaigns for brands including Google, Verizon and the Financial Times. 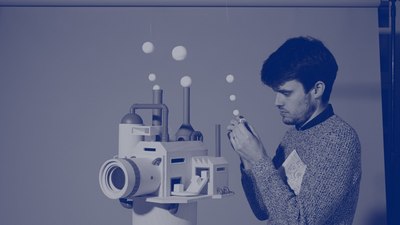 NEW YORK -- Full-service production studio Hornet Inc. has announced the signing of designer and director Kyle Bean. Bean’s work is tactile, constructed by Bean himself or in collaboration with a team.

“We’re so used to seeing things that are created entirely within a computer,” Bean said. “My finished work can be quite polished and graphic, but I like that in the creation of something tangible you see the imperfections, how elements are combined, how materials are used. It creates an inherent humor, a story, that we can all relate to.”

With his representation by Hornet, Bean plans to move further into moving image.

“It’s not a leap,” commented Michael Feder, Hornet’s Managing Director. “He works in such a physical way, from concept to finished piece, that it can easily culminate in a photograph or a 30-second short, while maintaining the same wit and respect for the subject matter.”

It’s an exciting foundation for Bean, who, over the last six years, has found himself working increasingly with agencies such as Wieden+Kennedy and Droga5 to create full-scale campaigns.

“I love how moving image can make you feel,” Bean continued. “How it can express things through light, sound and sequence. It’s a passion that comes from that era of cinema where you could take someone to another world by way of a studio. It’s why I do what I do today.”

Bean is represented by Hornet for motion work in the US. He has worked as a designer and art director for the past six years, creating illustrations, still images and shorts for brands including Louis Vuitton, Emirates, Prudential, the New York Times, Wired and Scientific American. In 2011, he was recognized as an ADC Young Gun.