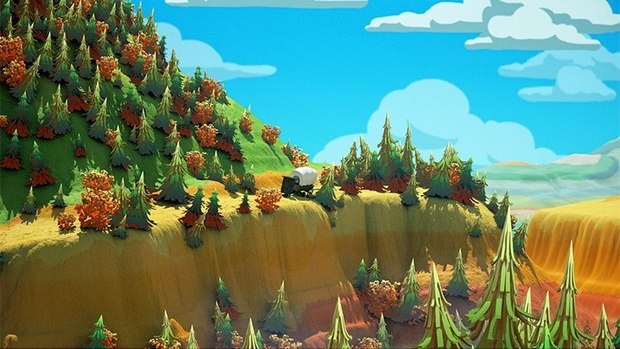 “When I was a kid I once had this class assignment to write the diary of a person who was traveling on the Oregon Trail, and I thought it was the most boring project in the world,” noted Director Gabe Askew. “So I came up with this really weird cast of characters to make the homework more interesting. That was sort of the seed that started the whole story.”

Complementing the film, Askew also built Trail Mix: Turtle Hurdle, an original mobile game for both iOS and Android. Based on the film’s main characters, Trail Mix: Turtle Hurdle challenges players to fend off hordes of wild animals by launching chains of turtles at them. Complete with several different levels and the aid of a few helper allies, players fight to stay alive as they navigate their way across the Oregon Trail.

“We had all these amazing assets from the film and I just really wanted to do more with the characters and the world we built for them,” Askew said. “I didn’t know the first thing about programming, but I was sort of dead set on making the game happen.”

Never having built a game before, Askew first outlined the premise of each level and then went about teaching himself C# and Unity3D, spending a solid week combing over tutorials and reading articles on the language and dynamic game building platform. After many diligent hours studying and several rounds of trial and error, Askew had a beta.

“It was surprisingly fun, so I kept going and kept building, and now I have thousands of lines of code, a new set of skills and a fully functioning game to show for it,” said Askew.

Complete with several different levels and the aide of a few helper allies, Trail Mix: Turtle Hurdle will be available for iOS and Android this Fall.

Hornet Films is a home for artists and creators dedicated to the development and production of original animated IP. With properties for film, television, web and a secondary focus on gaming, Hornet Films brings character-driven stories with unique and original points of view to life.