Season 3 of the popular animated series reimagines Shakespearian plays for kids – all in two minutes! 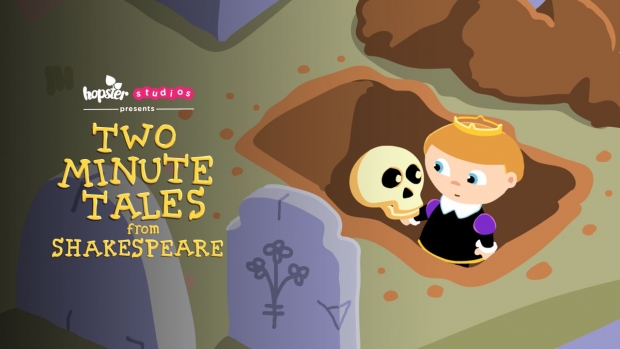 LONDON -- Hopster, BAFTA-nominated educational and entertainment digital platform, Hopster, has launched a brand-new animated serie,s Two Minute Tales from Shakespeare (10 x2 min). This original animation is the third season of the popular series, Two Minute Tales, developed by Hopster Studios Productions and produced by the Consortium of Gentlemen. The series features nine classic Shakespeare plays retold in two minutes, in a witty, speedy, and magical way; an additional episode is about Shakespeare himself.

The Very Busy Wizard (The Tempest):

The Glovemaker’s Son (How Shakespeare became a writer):

To support the series, Hopster has created a detailed educational activity pack for each episode offering children a deeper understanding of the stories and the art of storytelling through learning activities, fun games, and crafts. It has also commissioned a How to Make Your Own Cereal box theatre video:

Make your own theatre (3 min) from Hopster TV on Vimeo.

All ten packs can be downloaded here. Watch a mini trailer:

The first two seasons of Two Minute Tales were based on traditional Grimm’s Fairy Tales. They offer preschoolers fast-paced, modern, and quirky stories that challenge traditional gender stereotypes and promotes diversity. The series has received worldwide recognition including being shortlisted at last year’s British Animation Award in the Best Short Form Content category.

“Shakespeare's plays are wonderfully layered and complex but can be hard for kids to engage with from a young age,” commented Hopster head of content, Ellen Solberg. “We hope that by introducing kids to the key themes and characters of his stories in an enjoyable, creative and preschool-friendly way, they may go on to develop a stronger interest and passion for his plays and theatre later in life.

“It’s been fascinating adapting Shakespeare for such a young audience - the themes and characters in the plays are so strong that there’s an embarrassment of riches to work with," noted Consortium of Gentlemen narrator, writer, animator, and director, Mole Hill.