‘Hoops’ Canceled After One Season at Netflix 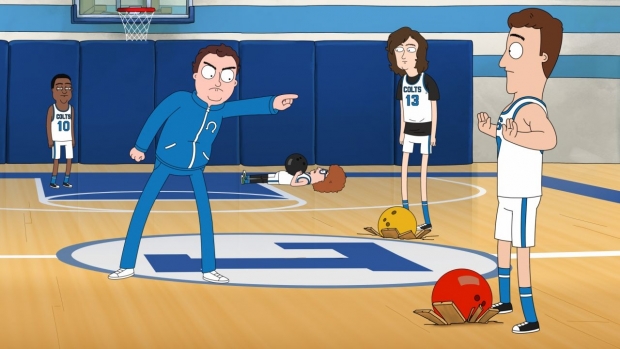 Ben Hoffman’s animated comedy series, Hoops, starring Spider-Man: Into the Spider-Verse’s Jake Johnson and executive produced by Phil Lord and Christopher Miller, will not return for a second season at Netflix.

According to sources at the streaming giant, they always evaluate viewing versus cost, and unlike more traditional industry players, they are not afraid to try out new ideas, giving a full season rather than just a pilot to any story they greenlight. They also told AWN that they are proud of their growing slate of adult animated series, including shows like Big Mouth, Disenchantment, and F is for Family as well as upcoming shows like Agent King, Inside Job, and Entergalactic.

Hoops, which premiered this past August 21, took a critical drubbing upon launch, despite a laudable performance by Johnson in a role noted for constant yelling. The show centered around a foul-mouthed Kentucky high school basketball coach, voiced by Johnson, who’s determined to bully his squad of awful players into a winning team, while pissing off anyone and everyone in his path. Hoops also starred Rob Riggle, Natasha Leggero, Ron Funches, Cleo King and A.D. Miles. Animated at Bento Box, the studio behind the production of hit shows like Bob’s Burgers and Duncanville, Hoops was executive produced by Hoffman, Johnson, Seth Cohen, M. Dickson, Itay Reiss, Phil Lord and Christopher Miller. The show was produced by 20th Century Fox Television.

At the show’s launch, Hoffman shared with AWN the show’s amusing backstory, noting, “I pitched MTV a basketball show. I think I forgot to mention that it was going to be R-rated and un-airable, but I didn't really care.  Because I didn't care if MTV picked it up or not.  My goal was for MTV not to pick it up.  And it was one of the few goals in my life that I have achieved.” Johnson told AWN he remembered working on the presentation, thinking “there’s no way anyone is going to buy this.” So, along with the creator, he figured, “Let’s just go for broke, and make it exactly how we want it to be.”

After producing a rather ribald short pilot, Hoffman recalled it was watched and rejected all over town. “That little pilot went viral all over Hollywood,” he said. “Almost like the original South Park holiday video. So, I got meetings all over town that went nowhere.  Until the Netflix meeting, where it went somewhere.” He further noted it took five years to get from “nowhere” to “somewhere” at Netflix. “We had to wait a long time for Netflix to grow from a DVD rental service to a streaming giant. Which was fine. I remember feeling young and optimistic at the time we first pitched the show, so it obviously took a long time to find a home. Because now I'm an old, pessimistic curmudgeon.”