Producers of ‘The Simpsons’ release a clip of Homer J. Simpson being doused with ice -- and more -- to raise awareness for Lou Gehrig's Disease. 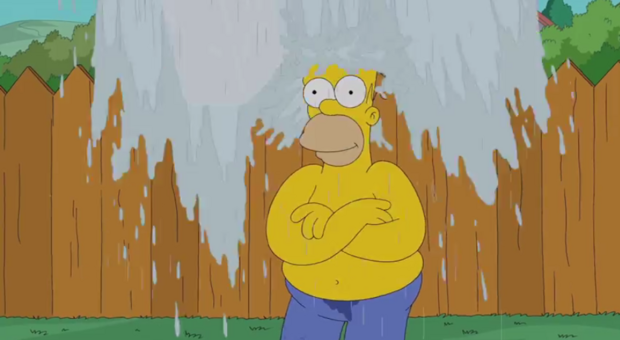 The ALS Ice Bucket Challenge has reached Springfield. Producers of The Simpsons have released a clip of Homer J. Simpson being doused with ice -- and more.

The 40-second clip was published on YouTube Tuesday night. It shows Homer nominating Ned Flanders, Lenny and Donald Trump to take the challenge, before dousing himself with a glass of water.

"Boy, ow, that was cold, brrr... but it was all worth it to raise awareness for ALS," Homer says.

A curtain of water then knocks him to the ground, followed by a range of cold-climate appropriate objects and animals, including penguins, a polar bear, ice hockey players, a Yeti, an ice cream truck, and something that looks suspiciously like Olaf’s head from Disney’s Frozen.

An upward pan reveals Bart Simpson in a helicopter, laughing, having just dropped the motherload.

"Fight ALS," Homer says to the camera before passing out.

ALS, or Lou Gehrig's Disease, is a form of motor neurone disease that affects nerve cells in the brain and spinal cord, rendering sufferers unable to control the muscles of their body. The ALS Ice Bucket Challenge began in late July when former Boston baseball player and ALS sufferer Pete Frates challenged his friends to perform the task to raise awareness. It subsequently went viral, with millions of challenge videos posted to social media accounts, and a sharp rise in donations to ALS.