‘The Hobbit: The Battle of The Five Armies’ Headed to Blu-ray

‘The Hobbit: The Battle of The Five Armies’ heads to disc March 24 from Warner Bros. Home Entertainment. 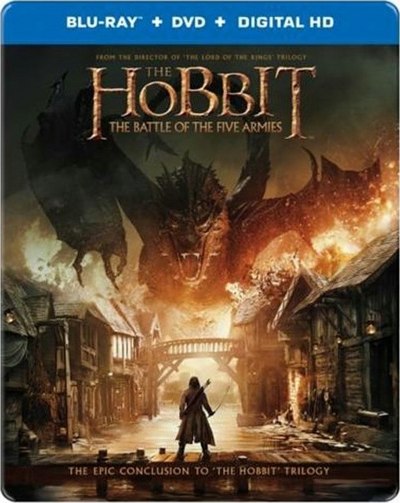 The screenplay for The Hobbit: The Battle of the Five Armies is by Fran Walsh & Philippa Boyens & Peter Jackson & Guillermo del Toro, based on the novel by J.R.R. Tolkien. Jackson also produced the film, together with Carolynne Cunningham, Zane Weiner and Fran Walsh. The executive producers are Alan Horn, Toby Emmerich, Ken Kamins and Carolyn Blackwood, with Philippa Boyens and Eileen Moran serving as co-producers.

The Hobbit Trilogy tells a continuous story set in Middle-earth 60 years before The Lord of the Rings, which Academy Award-winning filmmaker Peter Jackson and his team brought to the big screen in the blockbuster trilogy that culminated with the Oscar-winning The Lord of the Rings: The Return of the King.