HOAX Gets hAPPy with Dairy Queen and Coca-Cola Interactive App 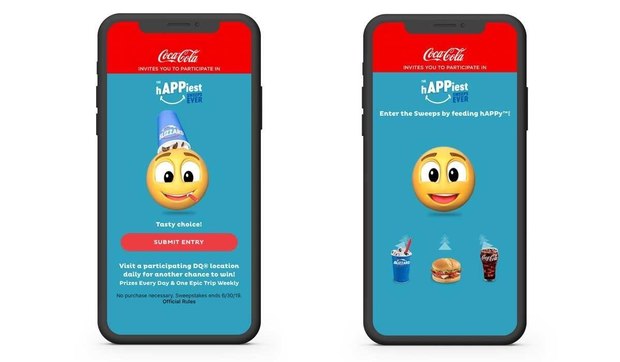 HOAX Films, a Los Angeles based VFX and motion graphics company, provided animation and character design for Dairy Queen and The Coca-Cola Company’s “The hAPPiest Sweeps Ever” interactive mobile app under the creative direction of Hathaway agency’s Anibal Suarez. This app provided the platform for Dairy Queen’s summer sweepstakes which awarded prizes ranging from family vacations to treat rewards.

The interactive game featured hAPPy, a smiling character, which users could feed selected food items, and in response, see fun animations. The character was created to embody the feeling of joy and summer while staying within the Dairy Queen brand. “The nuances of his facial animation were key to really bringing joy and life to the 3D model,” Shepherd commented. “We wanted him to feel recognizable as an emoji, but take him one step further. His eyebrow rig helped with his expressiveness. He needed to be able to communicate commands to the user, all through his facial expressions. His eyebrow raises and pupil directions showed eagerness for the user to hurry up and make a selection, and his pure hAPPy summer joy would be felt when he was finally rewarded with a treat, similar to a dog.”

“Working with Hathway was fantastic because they truly allowed us to be a part of the creative process,” Nelson added. “Often, an agency hands over some boards and says, ‘Here, make this.’ But we loved the trust they had in us, especially in our lead designer, Heather Shepherd. The back and forth creative process reminds me why we are all in this industry. It’s about collaborating on really fun creative content that speaks to everyone. And ice cream.”