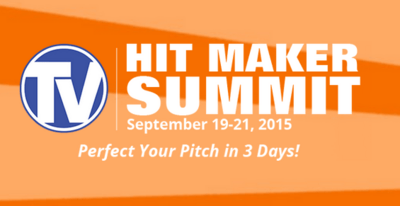 The Hit Maker Summit, a TV pitch crash course produced by SellYourTvConceptNow.com and held in Orlando every fall has announced its speakers and mentors for the 2015 event, taking place September 19-21.

“We are so excited to have such amazing talent and diversity returning this year to our Summit,” says co-founder Mark Simon.

Most of the speakers not only speak to the attendees, but they also work with the attendees on their concepts and pitches.

The 2015 Hit Maker Summit speakers are:

The Hit Maker Summit was founded in 2007 as an interactive summit for TV show creators who feel stuck with what to do with their show concepts.

Speaker Doug Stanley was originally an attendee at a Hit Maker Summit years ago. He now returns as a speaker after selling numerous shows using what he learned at the event. “Mark and Jeanne are fabulous,” he said. “I’ve had a long career in TV and I was having an extremely difficult time to pitch my own shows. They have provided me the sledgehammer I needed. Since I’ve worked with Mark and Jeanne, I’ve sold five of my own shows.”

Jeanne Simon is also excited about Kim Dawson returning as a speaker again in 2015. “Kim is unique in that he’s an independent producer, like all our attendees, but he also sat on the other side of the desk as a network executive,” she said. “He brings a perspective that few people in the world can offer.”

“Attendees are always surprised at how accessible all of our speakers and mentors are,” says Mark Simon. “They will sit right there at your table and work with you on your idea. You can’t get that kind of access anywhere else.”

The 2015 Hit Maker Summit takes place in Orlando, FL at the Hilton Orlando next to the famed Orange County Convention Center.