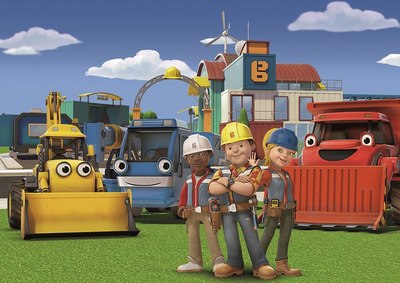 New York, NY -- HIT Entertainment, one of the world’s leading pre-school entertainment companies and a subsidiary of Mattel, Inc., and Televisa, Mexico’s #1 free to air broadcaster with a reach of 20 million households, announced that the re-imagined Bob the Builder television series will debut as part of the network’s highly successful preschool programming line-up later this year.  The launch of the series on Televisa will expand HIT Entertainment’s partnership with the network, which already airs Thomas & Friends, another leading Mattel property and program produced by HIT Entertainment.

“We are honored to be selected as the broadcasting partner for the highly anticipated Bob the Builder series in Mexico and are look forward to growing our already thriving partnership with Fisher-Price.  Their content portfolio has been incredibly impactful in helping us build out our popular preschool programming block” said Maca Rotter, Managing Director, Global Consumer Products, Televisa.

“Televisa has been an esteemed partner in bringing many of our core properties, such as Thomas & Friends, to the region, and as we expand our relationship, they will be instrumental in helping us introduce the new Bob the Builder series to kids and parents in Mexico,” said Claudia Scott-Hansen, Group Director, Broadcast, Mattel, The Americas.  “We are aligning our best possible partners, including Televisa, to enable us to share the reimagined Bob the Builder program with families across the globe.”

Bob the Builder’s contemporary new image is produced by HIT Entertainment with animation services provided by Canadian-based digital animation company Mainframe.  The new CG-animated series—which will air on Televisa in 2016—will see Bob the Builder continuing to bring the world of construction to life for kids, with new relatable locations and construction projects and aspirational heroes, including Bob himself, but also an expanded role for Wendy as the team’s Electrical Engineer.  In addition, there will be a greater incorporation of technology throughout Bob’s world and with the introduction of Bob’s new young, tech-savvy apprentice, Leo.  All of the show’s core machine characters return for the new series, including popular vehicles Lofty, Muck and Scoop.

HIT Entertainment first partnered with Televisa in November 2012 when the broadcaster began airing Thomas & Friends three days per week on Televisa (Canal 5).  In 2014, their partnership expanded to promote HIT Entertainment’s core properties across multiple entertainment platforms that target families, including their kid-targeted website Televisa Niños.  Thomas & Friends now airs on the network Monday through Friday and consistently ranking as a top program on the network.