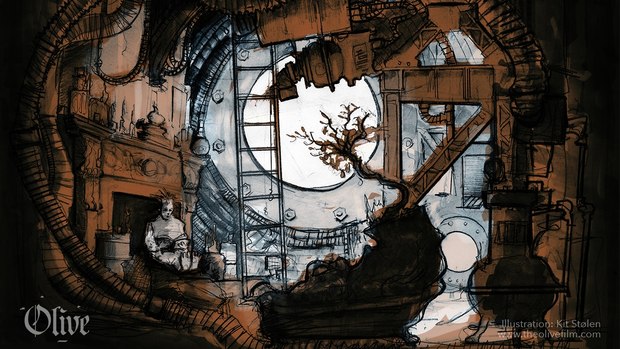 Backed by Hollywood staples Kodak, Panavision and Avid, this high-concept short mixes gritty live-action 16mm film and handcrafted stop-motion animation to build an uncanny vision of the future. Olive tells the tale of the last man alive and his fight to save his only friend -- an undernourished Olive tree; but there is a twist to this tender tale. Their cozy cottage for two has a band of pesky flies that have a long-overdue score to settle with mankind.

A graduate of the AFI Conservatory directing program, Martinez’ short film Dirty Laundry has been recognized by the DGA, ASC, Student Academy Awards and the Hampton’s International Film Festival. He grew up with paper and pen in hand, spending his childhood drawing up treacherous scenarios, alter-egos and devilish foes and absorbing the experimental aesthetics of Stan Brakhage and Phil Solomon.

Incentives for campaign backers include fantastic original artwork and even potted baby olive trees for those in need of “A Friend for Life.” The campaign runs parallel with the actual film production in order to give supporters an inside look at the sci-fi indie production from ground zero.

Martinez and his team are building a post-apocalyptic world on a tight, independent film budget using meticulously choreographed, on-set mechanical effects to achieve the most authentic look possible. The work includes building a scale miniature winter landscape to expand the desolate exterior environment, and crafting stop-motion armatures to painstakingly control the behavior of the film’s most perplexing characters: the flies.