Veteran industry exec will oversee development and launch of original IP and creative projects for kids at the Massachusetts-based animation, motion graphics, and mixed media studio. 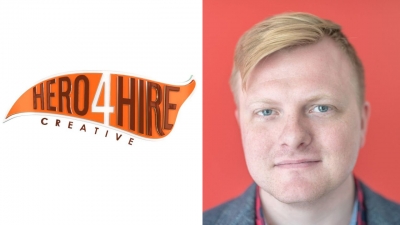 Hero4Hire Creative animation, motion graphics, and mixed media studio has named Jordan Beck head of development. He will oversee the launch of original kids’ IP and creative projects, focused on supporting the studios team of creators and storytellers.

A 15-year industry veteran and filmmaker, performer, and creative executive, Beck joined French Irish children’s entertainment company Fun Academy in 2015, where he produced, co-directed, and co-starred alongside Logan Lerman and Helena Bonham Carter in the 2018 animated feature, Sgt. Stubby, while also serving as a start-up executive. After the film’s release Beck served as chief operations officer, overseeing all aspects of its film, television, and digital content development.

“After a year where all of us were on the sidelines with the pandemic, everybody has had time to assess what matters most in both our personal and professional lives; for me, it’s working with passionate and creative people to deliver quality entertainment that families can share,” shared Beck. “Hero4Hire has already spent a decade creating world-class animation for clients and I can’t wait to get our original creations off the ground.”

Prior to his Fun Academy tenure, after graduating from University of Georgia, Beck started off working as a freelance graphic designer and session/touring musician for independent bands, music venues, theatrical performances, and recording studios. He also served as entertainment and creative director for the National Infantry Museum & Soldier Center near Ft. Benning, GA. Beyond his work in the entertainment industry, Beck is a decorated military intelligence officer in the Georgia Army National Guard.