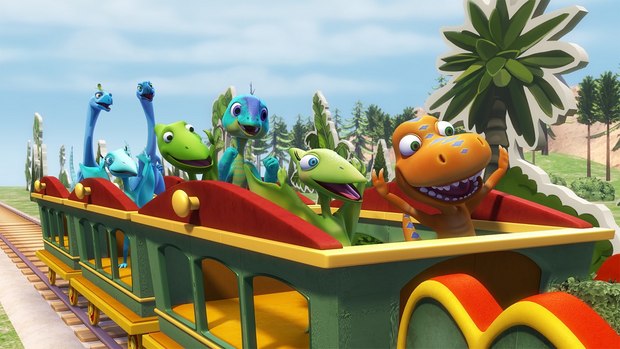 HOLLYWOOD -- Continuing the global expansion of its Dinosaur Train consumer products program, The Jim Henson Company has signed multiple licensing partners in key territories around the world, based on the EMMY Award-nominated and Parents’ Choice Silver Honor animated series, now in its fourth season. The announcement was made today by Federico San Martin, Vice President, Global Consumer Products at The Jim Henson Company.

In Germany, The Jim Henson Company has signed TV Mania for apparel and accessories and GEDA Labels for mealtime products. In Italy, Giochi Preziosi is on board for food with premiums and Panini for publishing. In the U.S., Wall-Ah! has joined the Dinosaur Train program with wall decals. These new licensees join existing Dinosaur Train partners around the globe, including global master toy partner Jazwares; Evrika LLC for chocolate eggs in Russia; California Costumes for costumes in the U.S.; and Fun Stickers for stickers in the U.K.

“Dinosaur Train continues to gain momentum as more and more children around the world are embracing the fun and whimsical world of Buddy and his family, and we are continuing to work with new partners to find innovative ways to engage young fans with fresh products that reflect the attributes of the brand,” commented San Martin. “With the fourth season of the series now on air, and our broadcast and digital partnerships expanding, we are in an amazing position to offer parents and their children the opportunity to experience the brand on and off screen.”

Dinosaur Train, created by Craig Bartlett, embraces and celebrates the fascination that preschoolers have with both dinosaurs and trains while encouraging basic scientific thinking and skills. In the series, viewers join Buddy and his adoptive family of Pteranodons on whimsical adventures through prehistoric jungles, swamps, volcanoes and oceans as they explore basic concepts in natural science, natural history and paleontology. The Dinosaur Train is a colorful locomotive, customized to accommodate all kinds of dinosaurs and has the ability to visit the Triassic, Jurassic and Cretaceous worlds. The train’s conductor, a knowledgeable Troodon, provides passengers with fascinating facts along the way.