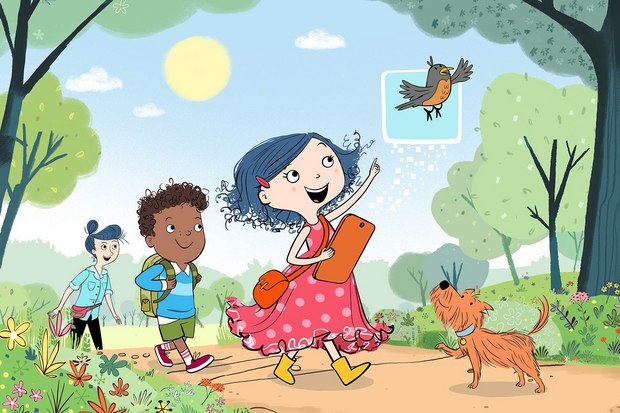 Based on the picture book by ‘New York Times’ bestselling author Randi Zuckerberg, ‘Dot.’ is currently airing on Sprout.

In Europe, Dot., has been acquired by Piwi+ in France, part of the Canal+ family, Dreamia’s Canal Panda in Portugal, and Sweden’s national public broadcaster SVT. Jim Jam has acquired the series for the MENA and Benelux territories; and Israel Education Television will air the series in Israel. In Canada, public broadcasters TVO (Ontario) and Knowledge Network (British Columbia) have acquired the broadcast rights to Splash and Bubbles.

“We have received an enthusiastic response for Splash and Bubbles and Dot., and have secured top broadcast partners in key territories to introduce children to these engaging new characters,” commented Ian Lambur, Management Consultant, The Jim Henson Company. “Splash and Bubbles’ humorous adventures will inspire children everywhere to explore the ocean alongside their favorite new underwater friends, and Dot, energetic and imaginative, will entertain children by showcasing the way she uses technology as a tool to enhance her everyday experiences and incorporate them into her playtime.”

Created by John Tartaglia (Imaginocean, Johnny and the Sprites), Splash and Bubbles (80 x 11’) premiered in fall 2016 on PBS KIDS, and encourage kids ages 4–7 to explore the diversity and spectacle of our natural undersea world. Through humorous characters and fun-filled storylines, supported by lively music with a Motown flair, children everywhere will want to learn more about our ocean and the diverse life teeming within it. Developed with an advisory panel of top marine biologists, digital media innovators and preschool educators, Splash and Bubbles is produced using the Emmy Award-winning Henson Digital Puppetry Studio, a proprietary technology from Jim Henson’s Creature Shop that allows puppeteers to perform digitally-animated characters in real-time, enabling the animation to be more lifelike and spontaneous, resulting in a unique and fresh look that is unlike traditional CG. Splash and Bubbles is produced by The Jim Henson Company (Dinosaur Train, Sid The Science Kid, Doozers) and Herschend Studios, the media arm of Herschend Enterprises (Dollywood, Harlem Globetrotters). Herschend Enterprises will support the series with broad-reaching location-based entertainment including a 4-D film with SimEx-Iwerks Entertainment, live-shows and experiential attractions at theme parks, aquariums and other venues. The series is funded in part by the Corporation for Public Broadcasting and by the National Science Foundation (NSF).

Dot. (52 x 11’) first premiered in fall 2016 on Canada’s CBC, and on Sprout, NBC Universal Cable Entertainment’s 24-hour preschool network in the U.S., where it has been a top performing franchise since its debut. All past episodes of the series will stream exclusively on Hulu beginning April 15. An original series for kids ages 4–7, based on the picture book by New York Times bestselling author Randi Zuckerberg, Dot. follows the inquisitive and exuberant tech-savvy Dot, who embarks on hilarious adventures to satisfy her imagination, curiosity and latest passion. For a girl as curious and creative as Dot, there’s no better way to spend the day than outside, exploring the world with her dog, friends, and any tool or tech that will help enhance their play and exploration. Dot. is produced by Industrial Brothers in association with The Jim Henson Company and the Canadian Broadcasting Corporation (CBC).