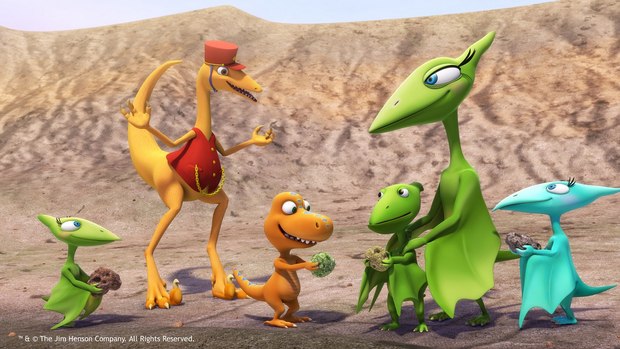 Hollywood, CA -- Following the recent announcement that production has begun on the fourth season of the two-time Emmy-nominated and Parents’ Choice Silver Honor animated series Dinosaur Train, The Jim Henson Company announced a number of new license agreements for the series.

“With children’s favorites, dinosaurs and trains at its heart, Dinosuar Train continues to garner the attention of media partners everywhere,” commented Richard Goldsmith, EVP, Global Distribution and International Consumer Products, The Jim Henson Company, on making the announcements. “All of our key broadcast partners continue to acquire our newest seasons of the series confirming for us that children around the world are tuning in for the latest fun adventures, and parents are supportive due to the educational nature of the series.”

In the United Arab Emirates, Emirates Cable TV and Multimedia, LLC, has licensed the rights to seasons one and two for their E-Junior channel.

Also in the international market, Netflix has acquired rights to Dinosaur Train season one for Canada, the UK, Germany and Spanish-speaking Latin America.  New partners in North America for season one include SVOD company Videotron for French-speaking Canada; and Movile for its video subscription app, PlayKids, for Canada.  Movile has also acquired the same rights for the UK and Germany.   PlayKids is the #1 app for kids under five in more than 30 countries, available in the App Store and Google Play.

The new fourth season of Dinosaur Train will air in the U.S. on PBS KIDS and will consist of 10 CG-animated, half-hour episodes (or 20 x 11 minute episodes), focusing this season on the themes of biodiversity and social diversity, and how both are necessary for a balanced life here on Earth.   Dinosaur Train consistently ranks as a top-rated children’s program among kids ages 2 to 5 on PBS KIDS.

Nominated for a Daytime Emmy in 2014 in the “Outstanding Writing in a Preschool Animated Program” category, and in 2013 in the “Outstanding Preschool Animated Program” category, Dinosaur Train is as popular with international audiences as it is in the U.S.  Dinosaur Train currently airs in over 175 countries across the globe with additional key broadcast partners that include TVO and TFO (Canada), Nickelodeon (UK), Disney Channel (Germany), NRK (Norway), YLE (Finland), Canal+ (Poland) and Channel 1 (Russia).

Dinosaur Train, created by Craig Bartlett (Hey Arnold!), embraces and celebrates the fascination that preschoolers have with both dinosaurs and trains while encouraging basic scientific thinking and skills.

In Dinosaur Train, viewers join Buddy and his adoptive family of Pteranodons on whimsical adventures through prehistoric jungles, swamps, volcanoes and oceans as they unearth basic concepts in natural science, natural history and paleontology. The Dinosaur Train is a colorful locomotive, customized to accommodate all kinds of dinosaurs and has the ability to visit the Triassic, Jurassic and Cretaceous worlds. The train’s conductor, a knowledgeable Troodon, provides passengers with fascinating facts along the way.

In addition to the television series, there is also a Dinosaur Train interactive website at PBSKIDS.org/dinosaurtrain. It is honored with a Kidscreen Award for Best Companion Website in the preschool category, a Parents’ Choice Silver Honor, and the prestigious Prix Jeunesse International Interactivity Prize.

Dinosaur Train is produced by The Jim Henson Company and co-produced with Singapore animation company Sparky Animation with the participation and assistance of the Singapore Media Development Authority. The series is executive produced by Lisa Henson and Halle Stanford for The Jim Henson Company.  Craig Bartlett also serves as executive producer. The Jim Henson Company oversees all ancillary exploitation of the property, including distribution, licensing and merchandising in all markets other than Asia, which is administered by Sparky Animation.  PBS handles DVD distribution to North American consumer and education markets.