The fourth season of the two-time EMMY-nominated and Parents’ Choice Silver Honor animated series will air on PBS KIDS. 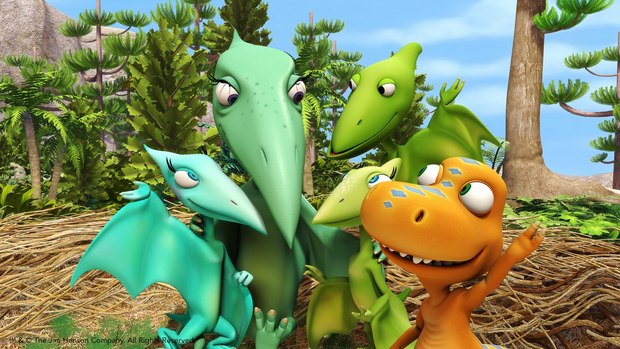 Hollywood, CA -- The Jim Henson Company announced the production of an all-new fourth season of the two-time EMMY-nominated and Parents’ Choice Silver Honor animated series Dinosaur Train.  A hit with both U.S. and international audiences, the new season will air on PBS KIDS where Dinosaur Train consistently ranks as a top-rated children’s program among kids ages 2 to 5.

The fourth season of Dinosaur Train, consisting of 10 CG-animated, half-hour episodes (or 20 x 11’ episodes), continues the exploration of Earth Science, focusing this season on the themes of biodiversity and social diversity, and how both are necessary for a balanced life here on Earth.  Previous episodes have tackled extreme weather, from hurricanes to droughts to forest fires, in which the Pteranodon kids learned that even forest fires can be good for the ecosystem, and that changing weather cycles are all part of the ever-changing Earth.  Season four will dig deeper to explore how in the Mesozoic Era, just like today, each creature has an important place in the ecosystem, from tiny bugs in the ground to the largest predators at the top of the food chain—and how when one species disappears, for whatever reason, Mother Nature adapts and readjusts, keeping the delicate balance in the diverse ecosystem.

“Our creative team, led by the incredible Craig Bartlett, have developed charismatic characters, innovative storylines, and a visually rich world, which combine to make Dinosaur Train so much fun for children,” said Lisa Henson, CEO of The Jim Henson Company.  “Parents too are big fans, as the series sparks the natural curiosity in our young audience and inspires children around the world to get into nature and make their own discoveries.”

Nominated for a Daytime Emmy in 2014 in the “Outstanding Writing in a Preschool Animated Program” category, and in 2013 in the “Outstanding Preschool Animated Program” category, Dinosaur Train is as popular with international audiences as it is in the U.S.  Dinosaur Train currently airs in over 175 countries across the globe with key broadcast partners, including TVO and TFO (Canada), Nickelodeon (UK), Disney Channel (Germany), France 5 (France), RTVE Clan (Spain) SVT (Sweden), NRK (Norway), YLE (Finland), Canal+ (Poland) and Channel 1 (Russia).

Dinosaur Train, created by Craig Bartlett (Hey Arnold!), embraces and celebrates the fascination that preschoolers have with both dinosaurs and trains while encouraging basic scientific thinking and skills. Each episode includes animated segments with live-action sequences featuring a paleontologist who brings to life the show's natural science and natural history curriculum for preschoolers, giving specific facts about dinosaurs and comparing their features to animals of today.  The series airs daily on PBS KIDS (check local listings).

In Dinosaur Train, viewers join Buddy and his adoptive family of Pteranodons on whimsical adventures through prehistoric jungles, swamps, volcanoes and oceans as they unearth basic concepts in natural science, natural history, and paleontology. The Dinosaur Train is a colorful locomotive, customized to accommodate all kinds of dinosaurs and has the ability to visit the Triassic, Jurassic, and Cretaceous worlds. The Train’s Conductor, a knowledgeable Troodon, provides passengers with fascinating facts along the way.

In addition to the television series, there is also the award-winning Dinosaur Train website at pbskids.org/dinosaurtrain. The site was honored with a 2013 Kidscreen Award for Best Companion Website in the “Preschool” category and is also a recipient of a Parents’ Choice Silver Honor and the prestigious Prix Jeunesse Award. The Jim Henson Company continues to encourage Dinosaur Train fans to join the “Nature Trackers Club,” a community of young children, their families and educators committed to learning about nature and doing good things for their environment.

Dinosaur Train is produced by The Jim Henson Company and co-produced with Singapore animation company Sparky Animation with the participation and assistance of the Singapore Media Development Authority. The series is executive produced by Lisa Henson and Halle Stanford for The Jim Henson Company.  Craig Bartlett also serves as executive producer. The Jim Henson Company oversees all ancillary exploitation of the property, including distribution, licensing and merchandising in all markets other than Asia, which is administered by Sparky Animation.  PBS handles DVD distribution to North American consumer and education markets.