The rocker, writer, actor, and DJ is the latest voice cast added to the upcoming show based on the superhero comic book series distributed by Marvel. 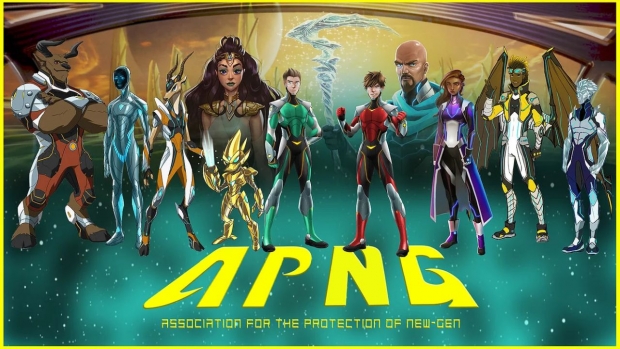 Henry Rollins has joined the cast of the sci-fi animation series NEW-GEN, currently in pre-production. Rollins will play series villain Deadalus. The series is being produced by J.D. and Chris Matonti and Julia Coppola of A.P.N.G. Enterprises and is based on the superhero comic book series distributed by Marvel Comics.

Rollins is known for many things: punk rock icon, spoken word poet, actor, author, and DJ.  He currently hosts a weekly radio show on L.A.’s renowned NPR affiliate KCRW. In 2013, after previously anchoring shows for IFC and “National Geographic,” Henry joined the History Channel’s H2 network as host of the TV show 10 Things You Don’t Know About. In 2014, Henry received the prestigious Ray Bradbury Creativity Award in recognition for his lifelong contribution to the arts, his passion for social activism, as well as his intense passion for the importance of maintaining books and libraries.  His acting credits include the animated Masters of the Universe and the acclaimed series Sons of Anarchy. "We are thrilled that Henry Rollins is joining our all-star NEW-GEN cast,” shared creator/director J.D. Matonti. “Henry will portray our master villain Deadalus, a brilliant, tormented nanotech-scientist exiled from NEW-GEN to The Underworld where he plots his revenge.”

NEW-GEN is about twin brothers (to be voiced by Finn Wolfhard & Nick Wolfhard) who live as ordinary teenagers and nanotech enhanced superheroes. It is a futuristic utopia where human beings, alien creatures, and mechanical life-forms peacefully co-exist. Designed and built with nanotechnology, NEW-GEN balances nature and technology, weaving together an ecologically sustainable paradise. Its existence becomes threatened by a nanotech war and heroes from Earth and NEW-GEN are called to defeat the encroaching evil.

Created by A.P.N.G.’s J.D. Matonti, Chris Matonti and Coppola, NEW-GEN’s writer/showrunner is Brent Friedman, whose credits include the Star Wars franchise, Halo 4, Call of Duty, Resident Evil, Star Trek: Enterprise, and Tale from the Borderlands. It is co-written by Eugene Son, who has worked on many superhero franchises, including Avengers Assemble, Ultimate Spider-Man, Ben 10, Teenage Mutant Ninja Turtles, Hulk and The Agents of S.M.A.S.H.

In addition, Ken West, former CFO of Marvel has joined as advisor to the board of A.P.N.G.

"Having served as the long-time CFO of Marvel Entertainment, leading up to its $4.4B sale to Disney, I view NEW-GEN's universe of diverse characters, and well-conceived business plan, as a unique opportunity for A.P.N.G. Enterprises, Inc. to replicate Marvel’s economic success and possibly ascend to become Marvel Entertainment 2.0,” commented West.

NEW-GEN plans to offer a multi-platform, multi-tech experience. Viewers will be able to download an augmented reality app enabling players’ use of nanotech powers to battle various creatures from the show. Fans can explore a web-based experience which weaves scientific fact and fiction to depict what nanotech is and where it might be in the future.