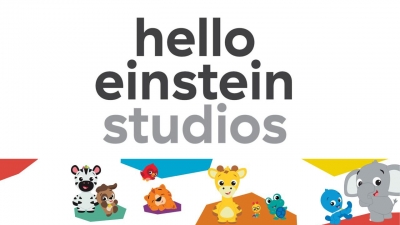 Children’s educational media and entertainment company, Hello Einstein Studios, has announced an expansion of its production and development slates. It has also announced an official “call for content pitches,” searching for ideas that will ignite curiosity in children. The company hopes to collaborate in production and development of content for various platforms such as streamable TV shows, music, and books.

Parent company Kids2 has extended its license of Baby Einstein toward the creation of the affiliated Hello Einstein Studios, which is gaining a foothold in the industry through major partnership deals with Moonbug, Roku, Pandora, and Giant Interactive.

“As our production continues to get more robust, Hello Einstein Studios is looking to collaborate with new partners, including the industry’s top and up-and-coming talent to develop new premium content that that cultivates curiosity for ages up to age 6 and engages children and parents alike worldwide,” commented Ryan Gunnigle, CEO and owner of Kids2 and founder of Hello Einstein Studios. “We want ideas that can extend to holistic solutions for parents in multiple forms of media – shows, music, books, toys and gear - to enhance the parenthood journey.”

Home to the animated series Baby Einstein Classics, Manners Manor, Cal’s Sound Yard, Patch’s Number Forest, and The Sandbox, the studio focuses on content is grounded in a set of core principles, centered on the importance of curiosity in babies and children. The shows encourage children to explore the world around them

“Our aim is to continue this robust development with new partners across all aspects of the industry,” added Gunnigle. “We are always looking to innovate and are passionate about collaborations that do just that.”

Most recently. Hello Einstein Studios launched The Sandbox on Roku, with music distribution on Pandora. Coming later this year is a new series, Baby Einstein: Ocean Explorers, which will premiere in conjunction with a companion line of products for children. Additional content is currently in production for shows that will launch beginning in 2023.

For more information or to receive our pitch submission form, contact info@helloeinsteinstudios.com