Menu bar application for macOS makes it easy for illustrators, designers and digital artists to configure and smooth out their graphic tablet, pen, mouse or other input. 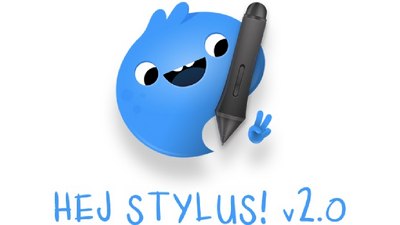 BERLIN -- Independent app creator Eilert Janssen has announced the release and immediate availability of Hej Stylus! V2.0, an important update to his menu bar application for macOS that makes it easy for illustrators, designers and digital artists to configure and smooth out their graphic tablet, pen, mouse or other input. The app works globally with other apps on the Mac, acting as a control system for the user’s graphic input device.

Hej Stylus! offers a free basic feature called “Position Pull,” which creates an offset between the real/physical cursor and the “virtual”/computed cursor position on the screen. The app takes into consideration the offset before then stabilizing the line/drawing to greatly smooth it out on-screen.

The app also manipulates all the data coming in from the tablet or other input device, including position/pressure/tilt and rotation, via the new running average algorithm. The algorithm compares the actual input value with a “running” previous one, to compute a new “smoothened” output.

Hej Stylus! works globally with every other application installed on a Mac, making it a valuable addition to any designer’s or artist’s digital toolkit. Hej Stylus! also offers exchangeable presets. This allows users to save their favorite settings and name them. Presets can be exchanged with other users, and can be loaded into the app. A little onscreen badge makes sure users know which preset they’re currently using. The app’s Tilt and Rotation Smoothing feature works like the new Position Smoothing Method, and makes painting with large, rake-like brushes more powerful than ever before. Meanwhile, the new Pressure Mapping function makes it easy to emulate soft and hard media behavior, and even invert pressure.

“I am always curious when it comes down to the connection of the analog and the digital worlds. I waited a long time for somebody to come up with an application like this, and when they didn’t I decided to work on it myself,” Janssen said. “After several emotional rollercoaster rides, version 1.0 was released in March 2016. Version 2.0 was released in late February 2017 as update to all existing customers. Now with version 2.0.2 we’ve gotten much closer to my dream!”