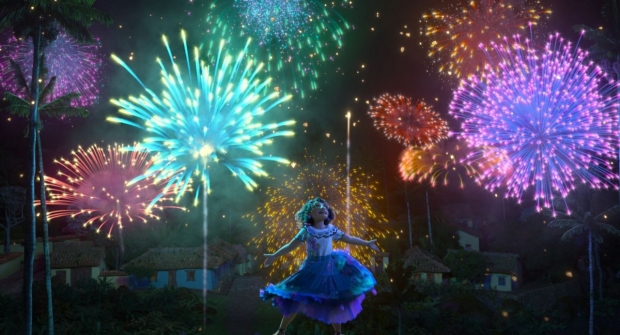 Walt Disney Animation Studios has just dropped a new featurette taking viewers behind-the-scenes on its 60th feature film, Encanto, opening in U.S. theaters November 24. Directors Jared Bush and Byron Howard, co-director Charise Castro Smith, producer Yvett Merino, songwriter Lin-Manuel Miranda, and stars Stephanie Beatriz and John Leguizamo, who lend their voices to Mirabel and Bruno in the film, walk us through some of the “magic” that went into the making of this “magical” film.

Encanto tells the tale of the Madrigals, an extraordinary family that lives in a wondrous, charmed place called an Encanto. Each child has been blessed with a magic gift unique to them - except Mirabel. But when the family’s home is threatened, Mirabel may be their only hope.

The film is directed by Howard (Zootopia, Tangled) and Bush (co-director Zootopia), co-directed by Castro Smith (writer The Death of Eva Sofia Valdez) and produced by Clark Spencer and Merino. Bush and Castro Smith are screenwriters on the film. Featuring new songs by Emmy, GRAMMY, and Tony Award winner Lin-Manuel Miranda and an original score by Germaine Franco, Walt Disney Animation Studios’ Encanto will be released in the U. S. on November 24.