Animated at Starburns Industries, retelling of the classic Hans Christian Andersen fable is written and produced by Sheila Nevins and directed by Simón Wilches-Castro. 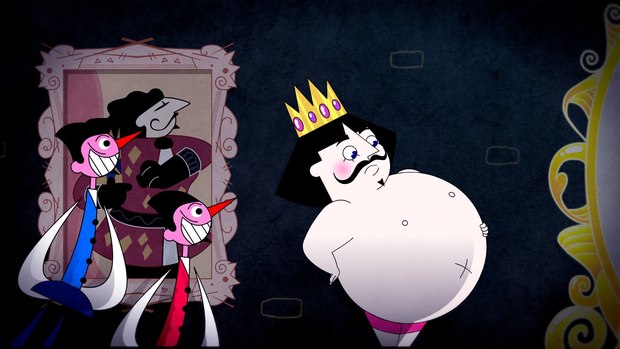 A retelling of the classic Hans Christian Andersen fable for our times, ‘The Emperor’s Newest Clothes’ is written and produced by Sheila Nevins and directed by Simón Wilches-Castro. All images courtesy of HBO.

The Emperor’s Newest Clothes, a new animated retelling of the classic Hans Christian Andersen fable written and produced by Sheila Nevins and directed by Simón Wilches-Castro, is set to air on HBO on November 15.

A graduate of the USC School of Cinematic Arts, where he holds a Masters degree in Animation and Digital Art, the Columbian-born Wilches-Castro completed his undergraduate studies in visual arts in Bogota, and later studied animation in Cuba. Working in Los Angeles, he currently serves as Creative Director at Titmouse Studio, where he has led projects such as the Toonami Exquisite Corpse celebrating the brand’s 25th anniversary and a range of IDs for Adult Swim. His films have screened in festivals around the world like Annecy, Hiroshima and Ottawa, and have won awards including a double Adobe Design Achievement Award, an Annie Award Nomination, and two Student academy award semi-finalist nominations. Made to match the mood of our current times, The Emperor’s Newest Clothes is a colorful, music-filled makeover of the well-known tale. The whimsical 2D short was animated at Starburns Industries and features the voices of Emmy winners Alan Alda and Jeff Daniels alongside Alison Pill, with original songs by Tony Award-winning composer William Finn.

Running 30 minutes, The Emperor’s Newest Clothes is set in an old kingdom where a great Emperor decides everything. Whether he tells villagers it’s sunny when it’s raining, or it’s raining when it’s sunny, the Emperor is the only arbiter who matters. Fearful of losing their jobs (or more), the Emperor’s closest confidantes, Syco the Jester and Phantic the Advisor continually praise his decisions, however foolish. When the Emperor declares a holiday celebrating himself, he orders Syco to round up the world’s greatest tailors to choose who might make him the “most beautiful, most exquisite” outfit ever. Predictably, he ends up hiring two tailors who are the most flattering in the kingdom, and who promise to make the most elegant outfit that’s ever been made.

Little does the Emperor know, the tailors are con men, and when Syco is sent to their shop to see how work is going, he sees only an empty metal mannequin stand as the tailors praise it as real clothes. Afraid to crack the Emperor’s delicate, insecure shell, both Syco and Phantic tell the increasingly impatient Emperor that the outfit is glorious and will be perfect. Finally, the tailors are “finished” with the suit, and with great fanfare they put it on the corpulent Emperor. Though he’s skeptical in his heart, the Emperor ends up believing all the praise from his ministers and becomes convinced he’s wearing the finest frock the world has ever seen.

On the day of the parade, the Emperor marches before his subjects -- wearing only his underwear! The townsfolk hesitantly go along with the pretense, fearing the wrath that might come if the Emperor knew his clothes were fake. But Thomasina, a perky girl in the crowd who is too young and too smart to join her elders in praising something that is not there, blurts out that the Emperor is wearing nothing at all! It took a child to reveal the truth that no one else was willing to say out loud!

Watch the opening sequence in the player below, and set a reminder to watch the full special when it airs on November 15: