HBO Releases First ‘The Last of Us’ Teaser Trailer

Leads Pedro Pascal and Bella Ramsey see some intense action as they fight the good fight, and we catch our first glimpse at a terrifying cordyceps-infected clicker along with the surprise appearance of Melanie Lynskey as a revolutionary leader. 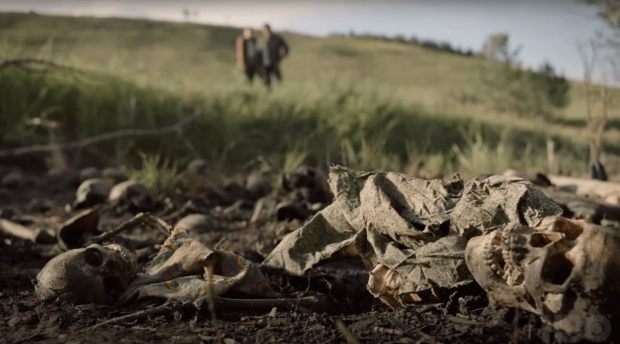 Save who you can save. HBO has released the first teaser trailer for its The Last of Us series adaptation series following the sneaky reveal of a few set photos back in August, and it is seriously intense!

In addition to leads Pedro Pascal and Bella Ramsey (Joel and Ellis), the thrilling trailer gives glimpses of Gabriel Luna as Joel’s brother Tommy, Merle Dandridge as Marlene, the leader of the rebel group the Fireflies, Nico Parker as Joel’s daughter Sarah, Murray Bartlett as Frank, Nick Offerman as Bill, Jeffrey Pierce as Perry, Anna Torv as Tess, and the surprise appearance of Melanie Lynskey as a revolutionary leader.

Based on the popular PlayStation game, The Last of Us centers around protagonists Joel and Ellie as they band together to survive in a post-pandemic world. The courageous duo must fend off enemies infected by the cordyceps virus called clickers in their search for remaining humanity. At its core, the series is a classic zombie tale following the fallout of a widespread deadly disease.

Witness the fight for humanity when The Last of Us streams on HBO in 2023.