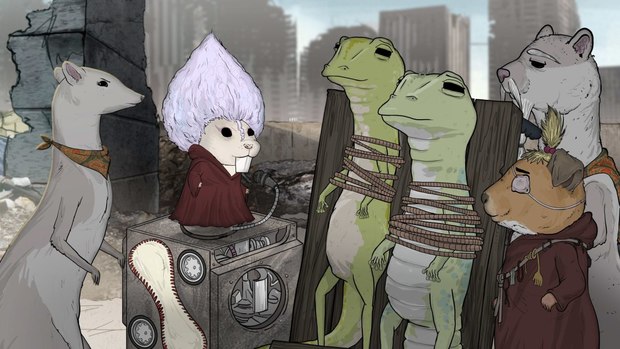 Animals, Phil Matarese and Mike Luciano’s HBO series that just concluded its third season run, will not be picked up for Season 4, according to a Deadline report. The adult animated comedy, executive produced by Jay and Mark Duplass, explores the lives of creatures native to Earth’s least habitable environment: New York City, with lovelorn rats, gender-questioning pigeons and aging bedbugs in the midst of a midlife crisis voiced by a who’s who of guest stars including Jason Alexander, Aziz Ansari, Fred Armisen, Jessica Chastain, Whoopi Goldberg, Tony Hale, Jonah Hill, Nick Kroll, Molly Shannon and Wanda Sykes, among many others.

In announcing the original HBO two-season pickup back in 2015, Mark Duplass commented, “Jay and I have been excited about bringing the principles of indie film to the TV space, and to have our first real experiment land at a place like HBO for two seasons is beyond what we could have imagined.

Matarese and Luciano chimed in, “Going from having made Animals in the supply closet at our day job to making Animals in a supply closet at HBO headquarters is an unfathomable dream come true. HBO has so many supplies, you have no idea! Great for drawing stuff.”

In an extensive interview with AWN published this past August, Luciano remarked about the show’s modest but special beginnings, “It’s rare when you have an idea that feels worth sticking to. It would have been one thing if we made one of the shorts, and ‘oh, well, that was fun, okay,’ and moved on. But -- and we talk about this a lot -- even that one-minute short had a little package to it, where it felt like an episode of something bigger. We just kept doing it, and kept believing in it, and I think that carried us through a lot, just having that wherewithal to stay with the idea and keep seeing it out.”

Animals began life as a passion project for Matarese and Luciano, who worked together at a New York advertising production company. They would sit and “voice” a pair of pigeons outside their office. Matarese, who illustrated in his free time, suggested a pigeon-riffing scene – “Pigeons…” became the first in their series of shorts they dubbed “Animals,” which screened around New York and at festivals like SXSW. After winning Best Comedy at the 2013 New York Television Festival, the pair caught the attention of the Duplass brothers, who subsequently privately financed the first season of production without a distribution deal in place. After the first two episodes premiered at the 2015 Sundance Festival, HBO signed a two-season order, later picking up a third season which aired earlier this year.

The show was animated at Dan Harmon’s Starburns Industries, known for the hit series Rick & Morty as well as the Charlie Kaufman stop-motion feature, Anomalisa.