Hasbro classic ‘Transformers: Generation 1’ launches on Vimeo On Demand; additional Hasbro titles including ‘My Little Pony: Friendship Is Magic’ and ‘Jem and the Holograms’ to launch later this year. 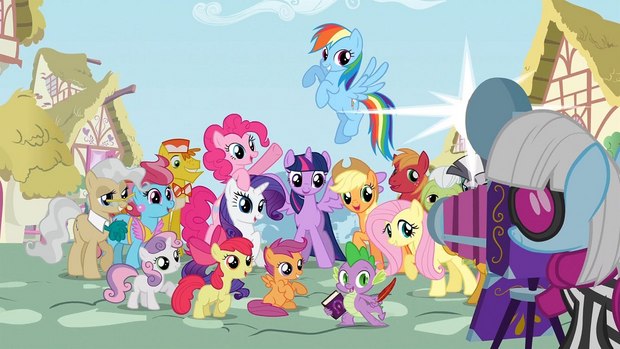 New York, NY -- Vimeo announced a collaboration with Hasbro Studios to offer digital collections of classic animation series from the Hasbro Classic Collection, including fan favorites Transformers: Generation 1 and Jem – both available now on Vimeo On Demand. Fans of the beloved franchises have the option to buy individual episodes for $2.99, rent for 24-hours for $.99, or purchase the entire series for $40. Additionally, the collaboration will bring hundreds of episodes across 13 Hasbro Studios franchises to Vimeo On Demand through 2015. For the first time, fans of popular animation series like Jem, G.I. Joe, My Little Pony, and Transformers can now own every episode in one organized collection on Vimeo to watch anytime across any device.

Hasbro Studios titles coming to Vimeo On Demand include:

Jem and the Holograms: When Jerrica Benton inherits Starlight Music and Starlight House, a home for foster girls, she also inherits Synergy, a holographic computer designed by her late father to be "the ultimate audiovisual entertainment synthesizer." Using holograms, Synergy helps Jerrica and her pals become Jem and the Holograms, a pop band. They battle other bands, like the Misfits and the Stingers, to keep the Starlight Foundation going -- while keeping Jem's real identity secret! (Available NOW: vimeo.com/ondemand/jemandtheholograms)

The Transformers (Generation One): This iconic 80's TV series, Transformers: Generation 1 introduces audiences to Transformers, sentient robotic beings from Cybertron who crash land on Earth and are divided into two opposing factions, the autobots and decepticons. (Available NOW: Transformers.tv or vimeo.com/ondemand/transformersgen1)

G.I. Joe: Based on the successful toy series by Hasbro, GI Joe is the code name for an elite strike force comprising of personnel from all branches of the United States military. Their primary purpose is to act as a counterforce to the huge terrorist organization called Cobra which is gunning for world domination. (Available May 15, 2015)

My Little Pony: Friendship Is Magic: In the magical land of Equestria, a kingdom populated only by colorful ponies, TWILIGHT SPARKLE, a studious and slightly reclusive young unicorn intent only on enhancing her magical abilities, has been assigned by her mentor, PRINCESS CELESTIA, a very important task: get your muzzle out of those books and make some friends! In the quaint, fairytale village of PONYVILLE, TWILIGHT SPARKLE meets 5 new ponies, and through funny, offbeat experiences and exciting, enchanted adventures, they teach her about the most powerful magic of all: the magic of friendship! (Available later in 2015)

Transformers: Rescue Bots: Transformers:Rescue Bots follows the adventures of four young Transformers and their human counterparts- a family of emergency responders. HEATWAVE, CHASE, BLADES and BOULDER are tasked by OPTIMUS PRIME to study the ways of humanity and protect mankind on the island of Griffin Rock, a highly advanced hub of technology where anything can happen. Whether it be rampaging Dinobots, volcanoes accidentally brought to life, or floating lobsters, the Rescue Bots will never hesitate to ROLL TO THE RESCUE!

Transformers: Prime: Roll out with all-new adventures starring Optimus Prime, Bumblebee, Arcee, and the rest of the heroic Autobots as they battle the evil Decepticons! Now that big bad Megatron has returned to Earth, Team Prime prepares for an epic struggle to save the planet. Meanwhile, the Autobots have to guard Jack, Miko, and Raf, three kids who've accidentally discovered them. Intense drama, heavy metal action, awesome animation--it's all here, bigger and better than ever! (Available later in 2015)

Transformers: Robots in Disguise: When a Cybertronian prison ship crashes on Earth, a new team of Autobots, led by Bumblebee, arrives to protect the planet -- and the galaxy -- from hundreds of escaped Deception fugitives! Following a mysterious message from another dimension, this ragtag band of heroes learns to trust and fight alongside one another, and begins to suspect the crash might not have been an accident -- but only the beginning of a larger, much more sinister plan! (Available later in 2015)

G.I. Joe: Renegades: Branded as renegades for crimes they did not commit, a heroic group of young G.I.s is forced to "turn fugitive" as they battle to clear their names, and expose the evil that is Cobra Industries -- a seemingly benevolent mega-corporation covertly controlled by a rogues gallery intent on creating a New World Order. (Available later in 2015)

Kaijudo: Rise of the Duel Masters: Ray, a 14-year-old who lives with his mom and grandfather, has been recruited by the Duel Masters to study KAIJUDO – “The Way of the Creature.” They chose Ray for his natural talent as a creature tamer and duelist. Along with pals Allie and Gabe, Ray learns to work with the magical creatures… in their world. Each duel he fights yields new experience and allies in both worlds. The Veil, which has divided the two worlds for a thousand years, is crumbling. Hope lies with those who can masters the art of KAIJUDO. (Available later in 2015)

Littlest Pet Shop: Blythe lives in the big city, right above the Littlest Pet Shop, a day-camp for all types of pets. When she discovers she can talk to the animals, it's the beginning of music-filled, zany adventures with her new four-legged friends. (Available later in 2015)

Pound Puppies: In this series, the mission of a team of fearless dogs is to find homes for puppies in need. Their motto is “A pup for every person and a person for every pup.” The Pound Puppies appear to be “average dogs” keeping the humans who are running Shelter 17 in the dark while helping “dog-kind” find loving families. Once you’re a Pound Puppy, you’re always a Pound Puppy. (Available later in 2015)

The Adventures of Chuck & Friends: Chuck is a smart, adventurous, creative, funny dreamer and doer with the world at his wheels! Chuck and his friends push the limits, of their imagination and what they can build and do, with great adventures, which always end with a lesson learned and the kid trucks totally covered in mud! The Adventures of Chuck & Friends is all about rugged action, the thrill of discovery, big adventures, and most of all, having fun with your friends. Turn the key, floor the accelerator, and get your imagination into high gear as we zoom along with Chuck! (Available later in 2015)

B-Daman Crossfire: Riki Ryugasaki is just an ordinary boy who loves mystery and adventure. Then one day he is introduced to a game called "B-Daman" by his friend, Sumi. He gets to choose a B-Daman of his own and picks the blue dragon, Dracyan. When he charges Dracyan, he receives an invitation to a secret tournament called "Crossfire.” (Available later in 2015)