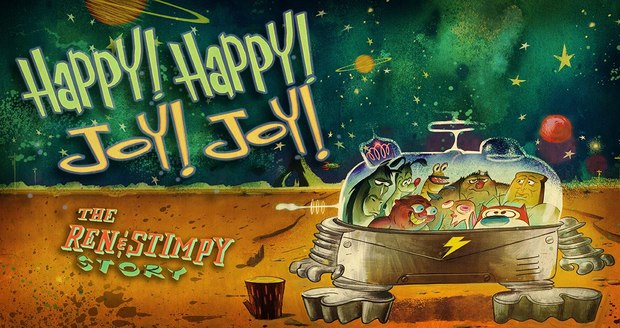 It’s been twenty-five years since Ren & Stimpy caused mayhem on Nickelodeon. And unless you’re a hardcore fan, you might still wonder if Ren is the demented chihuahua or the half-witted cat. (Stimpy, for the record, is the blue-nosed cat; Ren the mosquito-looking dog.) The series’ black comedy, toilet humor, and sexual innuendo led to altercations with Standards and Practices and earned ardent fans worldwide. Those fans now have a chance to be an instrumental part of this cult favorite -- through a Kickstarter campaign launched in support of the documentary Happy Happy, Joy Joy - The Ren & Stimpy Story.

Production industry veterans Ron Cicero and Kimo Easterwood, the duo behind the film, argue that the creativity that fueled the animated series is akin to the intrepid genius and controversial merit of Banksy and Warhol. And like any great art, it had a deep emotional impact on a range of viewers from a self-described “Hillbilly Bartender from Myrtle Beach” to celebrities like Jack Black, Billy Gibbons, and Iliza Shlesinger.

The feature length documentary, Happy Happy, Joy Joy - The Ren & Stimpy Story, now in postproduction, reveals the collective genius -- and longstanding influence -- of a series that was cut short. While the departure of John Kricfalusi, the show’s creator, has been well reported, the story of how Ren & Stimpy upended TV animation; touched everyone from neurosurgeons to the superstars at Pixar, AND became a multi-billion property, is fading into obscurity. The film aims to change that through insights gleaned from over 45 artists, directors and network execs connected to the show, plus art historians, and a range of fans. Also featured are original animated shorts from many of the Ren & Stimpy cartoonists.

In order to complete the film and give the groundbreaking series the wider respect it deserves, the team has launched a Kickstarter campaign aimed at raising funds to help get this project made. Those looking to own a piece of their 90’s youth -- along with fans of comedy, animation, or pop art -- have the opportunity to donate to the project and have their generosity rewarded with original artwork, a film credit, or even a one-of-a kind LOG. (“What rolls down stairs, alone or in pairs…”)