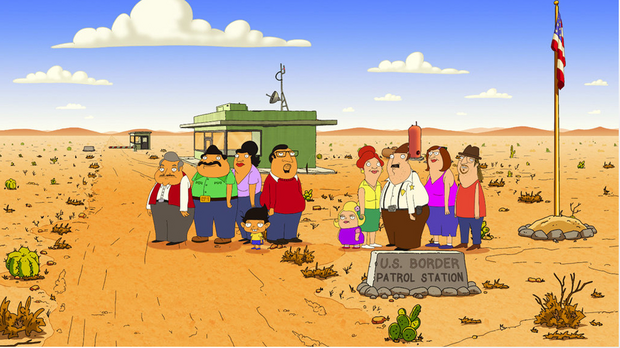 Bordertown takes a satirical look at the cultural shifts occurring in America. Exploring family, politics and everything in between with a cross-cultural wink, the series centers on two very different families living in a fictional Southwest desert town on the U.S.-Mexico border. Azaria’s Bud Buckwald is a married father of three and a Border Patrol agent who is just a tad behind the times and feels slightly threatened by the cultural changes transforming his neighborhood. He lives next door to Ernesto Gonzalez, an ambitious immigrant and family man, who has been in the country less than 10 years, but is already doing better than Bud -- which, it turns out, is a bit of an issue for the less-industrious native.

Bud is married to Janice Buckwald (Borstein), both the wisest and most oblivious member of the family. The Buckwald kids include Becky (Borstein), a socially awkward, big-boned geek; Sanford (Friedlander), a loser who thinks he’s a player; and Gert (Pyle), a beauty pageant-obsessed five-year-old with a pet pig. Meanwhile, living the American Dream next door are the Gonzalezes, including Maria, Ernesto’s wife; their son, Ruiz (Ramirez); and their 21-year-old nephew, J.C. (Gonzalez), a recent college graduate.

Azaria provides multiple voices on The Simpsons, including Moe, Apu and Chief Wiggum. He will next be seen on the critically acclaimed drama Ray Donovan. His film credits include Night at the Museum 2: Battle of the Smithsonian, Run, Fatboy, Run, The Simpsons Movie, America’s Sweethearts, Tim Robbins’ Cradle Will Rock, David E. Kelley’s Mystery, Alaska, Mystery Men, Godzilla, Homegrown, Great Expectations, Woody Allen’s Celebrity and The Smurfs. He also starred in the cable series Huff and the World War II miniseries Uprising. He appeared as Professor Groteschele in the live television broadcast Fail Safe. Azaria won an Emmy Award for Outstanding Supporting Actor in a Miniseries or Movie for his work in the 1999 telefilm Tuesdays with Morrie. He won three other Emmy Awards for his work on The Simpsons. He was nominated for a Screen Actors Guild Award for his memorable role as Agador Spartacus in Mike Nichols’ The Birdcage, and garnered critical praise for his portrayal of television producer Al Freedman in the Academy Award-nominated Quiz Show. Other feature credits include Heat, Grosse Point Blank, Now and Then and Pretty Woman.