Hank Azaria Apologizes for Portrayal of Apu on ‘The Simpsons’

The actor is reaching out to make amends for his inherently racist and insulting voice work as the show’s Kwik-E-Mart owner, which for three decades he portrayed with an outrageously exaggerated Indian accent. 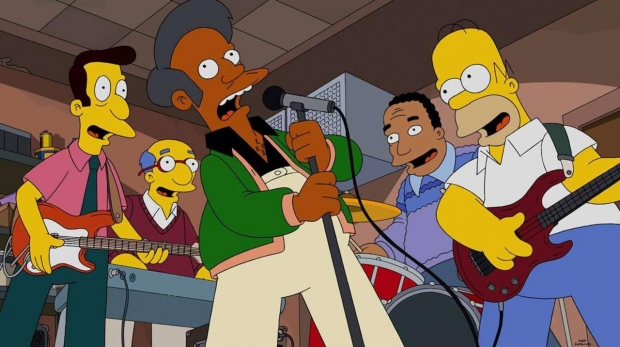 Actor and comedian Hank Azaria is attempting to apologize to the U.S. Indian community by speaking out about the damage he caused with his thre decades-long role as Indian Kwik-E-Mart owner Apu Nahasapeemapetilon on The Simpsons, a role he officially relinquished in January of 2020.

Speaking with Dax Shepard on the Armchair Expert podcast, Azaria states, “It’s not about congratulating me for the response because I’m a big part in creating the problem to begin with. So, nothing takes that away except maybe an amends over time which I am attempting to make.”

The actor also said, “Part of me feels I need to go round to every single Indian person in this country and apologize.”

Further expressing his regret, the actor shared that he’s been reaching out to the Indian community to learn about the impact of his miscast role. “I was speaking at my son’s school. I was talking to the Indian kids there because I wanted to get their input,” Azaria said. “A 17-year-old who’d never even seen The Simpsons but still familiar with Apu had ‘tears in his eyes.;”

In the last year, a number of high-profile animated series have addressed their history of using white actors to voice Black or biracial characters by re-casting such roles with actors of color. Big Mouth’s Jenny Slate, Central Park’s Kristen Bell, Family Guy’s Mike Henry, and The Simpsons’ Harry Shearer have all recently stepped away from voicing characters of color, with actors Ayo Edebiri,  Emmy Raver-Lampman, Arif Zahir, and Kevin Michael Richardson taking on the roles, respectively.

But Azaria’s Apu has in many ways been the most controversial, in part because The Simpson’s producers initially pushed back when addressing criticism about the issue. That criticism came to a head with the release of comedian Hari Kondabolu’s 2017 documentary, The Problem with Apu, which featured multiple interviews with people of Indian and South Asian descent who shared how they were bullied or mocked as a result of the thick-accented convenience store owner. Kondabolu claimed that Apu, a college educated Indian immigrant, voiced by Azaria with an outrageously exaggerated accent, was inherently racist and insulting.

In a move many considered a tone-deaf response to charges they lacked sensitivity regarding casting diversity, the show’s producers raised eyebrows with their April 8, 2018 episode, “No Good Read Goes Unpunished.” In the episode, as Marge reads her favorite childhood book, “The Princess in the Garden” to Lisa, she realizes its quite more culturally offensive then she remembered. Reflecting on society’s increasing political correctness, Lisa looks at the camera and says, “Something that started decades ago and was applauded and inoffensive is now politically incorrect. What can you do?” She then looks over at a framed picture of Apu, which has the line “Don’t have a cow!” written on it.

As for Azaria’s own response to the growing controversy, during a 2018 appearance on The Late Show with Stephen Colbert, he said, “I’m perfectly willing and happy to step aside, or help transition it into something new. The idea that anyone, young or old, past or present, was bullied or teased based on the character of Apu, it just really makes me sad… It was certainly not my intention. I wanted to spread laughter and joy.”

This past February, in a BBC interview, The Simpsons creator Matt Groening announced the show will no longer cast white actors as non-white characters, voicing his support for the decision to replace Shearer in the role of Dr. Hibbert while agreeing that change was needed, not just with actors, but the entire industry. “I absolutely agree with that. And we're trying to make it better. Bigotry and racism are still an incredible problem and it's good to finally go for more equality and representation."

We look forward to watching these and other such shows with their new casts for many years to come; The Simpsons was just renewed by Fox through 2023.