The Oscar-qualified short combines 2D animation with contemporary artistry to adapt a poem about the true-life experiences of poet and World War II veteran Edward Field. 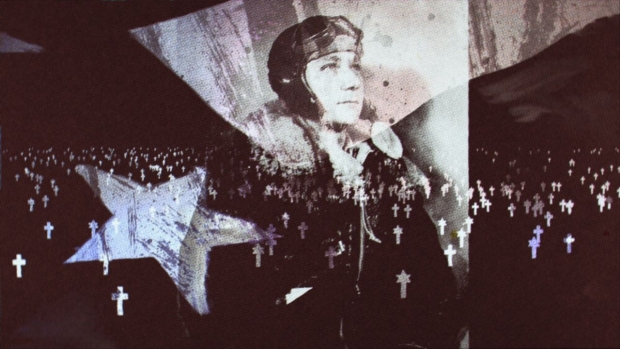 The 10-minute animated short film, Minor Accident of War, based on a true story of survival, combines 2D hand-drawn animation with an incident that took place 75 years ago when veteran Edward Field, now 96 years-old, fought in World War II. The film is an adaptation of a published poem by Field inspired by his harrowing experience as navigator flying in the largest Allied air raid ever over Berlin in 1945.

During that Winter 1945 mission over Nazi Germany, Lieutenant Field’s plane was shot down and crashed into the North Sea. He survived that fateful raid and authored the poem in 1967, recording the film’s narration on his 95th birthday in 2019. Minor Accident of War transcends time and place with raw emotion and humanity. Read Field’s poem here.

Field's niece, filmmaker Diane Weis, gathered a team of world-class artists from Poland and the U.S. to create a unique film that combines history with contemporary storytelling, honoring her uncle and all veterans that fought for freedom.

“From the moment I decided to adapt the poem into a film I envisioned it animated,” shared Weis. "And when I discovered Piotr’s work and saw his graphic hand-drawn, multi-layer collage style, it was immediately clear that this would be the most compelling way to bring the story to the screen.”

“Making this film has been such a rewarding experience on so many levels,” she added. “We are grateful to all the festivals and fans who responded so enthusiastically and championed our film to get to this pivotal point to be considered for an Oscar. It is an honor.”

“You could say the film is 75 years in the making,” she continued. “Edward lived it, wrote it, and narrates it. Quite a trifecta in filmmaking.”

Field is a respected and noted author and poet; he wrote the 1966 Academy Award-winning short documentary, To Be Alive, and is well-known in LGBT literature and the literary world.