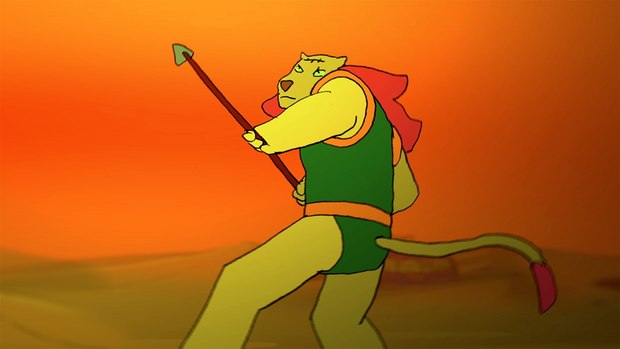 Animated in 2D as a solo effort by DiLiberto, this film is the product of four years’ work and is comprised of 60,000 painstakingly hand-drawn frames. DiLiberto’s Nova Seed has just completed a year-long run at festivals around the world including, its world premiere at TAAFI in Toronto, a US premiere at Fantastic Fest, and the European premiere at 14th Carrefour du Cinéma d’Animation in Paris. Nova Seed garnered a nomination for the coveted Satoshi Kon Award at the Fantasia International Film Festival.

Pre-sales for Nova Seed began March 7 on VHX, the House of Cool portal where the special edition is available. Stephen Verrall’s soundtrack album will be available on all digital platforms March 24 through Lakeshore Records. The March 28 release will see the film’s availability expand to Mondo (SVOD), Amazon Video, Google Play, iTunes and Amazon.com.

Nova Seed is an action-packed, post-apocalyptic, sci-fi adventure that follows a lion-man (a Neo-Animal Combatant or NAC) who must save the Nova Seed, a mystic force of nature in the form of a girl, from Dr. Mindskull, an evil half-man bent on remaking the world in his image.

“This is the film that every true lover of animated movies has been waiting for,” said Ricardo Curtis, President and Creative Director of House of Cool. “Nova Seed is one man’s brilliant vision of what animation should be. Nick is the second coming of great auteurs like Moebius and Ralph Bakshi, in the form of a modern day Heavy Metal.”

DiLiberto said, “I grew up with 2D animated shows like He-Man and Thunder Cats and I wanted to be a part of that, but as an adult I was disappointed that everything I saw and worked on was so slick and manufactured. I wanted to make something that made me feel like I did when I was a kid, and I was tired of waiting for Disney or DreamWorks to make it for me. So, I made it myself.”

“Every now and then, you see something that is so original that you have to be a part of it. Nova Seed is that type of film,” said Kate Moo King-Curtis (The Prince of Egypt, Road to El Dorado, Curious George), Creative Developer at House of Cool. “The red on screen is literally from Nick’s bleeding fingers.”