Following on the success of its Top Cat campaign, iconic WB character appears in a new ad for Halifax bank. 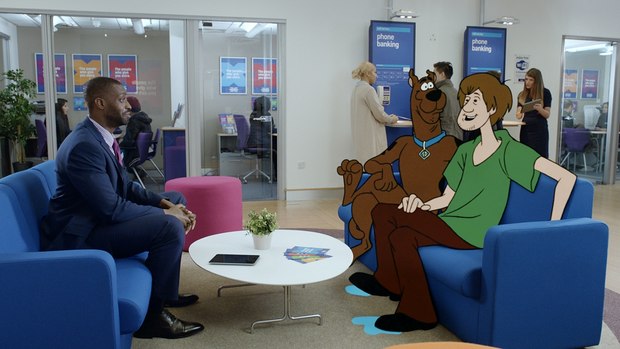 Halifax has unveiled Scooby-Doo as the latest iconic character to feature in its new TV advertising campaign.

Following the success of its Top Cat campaign which made Halifax the only bank to feature in Adwatch’s most memorable ads of 2016,  it has teamed up with adam&eveDBB for the latest ad which sees Scooby-Doo and the Gang escaping the clutches of a mummy by scooting in to a Halifax branch.

The hapless heroes find out how Halifax rewards its customers with money back through everyday purchases. As they enjoy a pizza after a trip to the shops, Scooby-Doo hands over his Halifax debit card to pick up the tab when he’s confronted by the villain. Scooby-Doo then captures the mummy, before being congratulated by the rest of his mystery-solving Gang.

The advert was first broadcast first on Sunday, January 8, on Channel 4 at 21:45. Scooby-Doo and the Gang will also feature in branch and online advertising, as well as social media to promote Halifax’s cashback extras campaign.

The advert was filmed in London’s Hanover branch and features Halifax colleagues as extras.

“Scooby-Doo is the third iconic character to feature in our re-energized advertising campaign, dialing up our desire to stand apart from other banks and be on the side of our customers,” said Halifax MD Russell Galley. “Our TV ad featuring Top Cat last year generated our biggest ever social media engagement with more than four million views on Facebook and Twitter, so we wanted to follow up this success with another much-loved character. Just like the previous stars of our ads, Scooby and the Gang help us demonstrate our commitment to helping customers to be better off, showing that whoever comes through our doors will be welcomed by our friendly, down-to-earth colleagues.”

“The campaign is all about getting Halifax back to what it does best with advertising that gets talked about and engages customers,” said Catherine Kehoe, Managing Director, Group Brands and Marketing, Halifax. “Scooby-Doo is such an iconic character and universally loved – the perfect character to demonstrate how we reward customers who bank with us.”