New trailer for Paramount’s ‘Teenage Mutant Ninja Turtles: Out of the Shadows’ depicts the Turtles yearning to leave the sewers and fit into the human world. 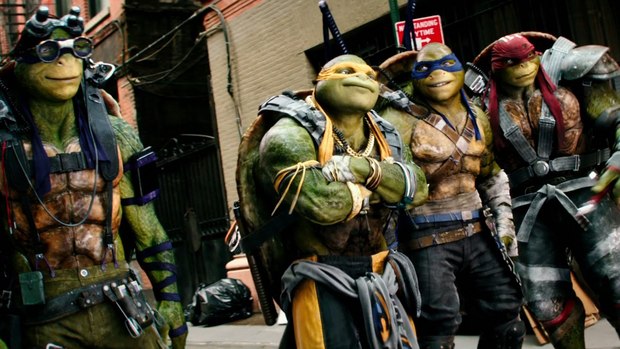 Paramount has unveiled the latest trailer and a new poster for Teenage Mutant Ninja Turtles: Out of the Shadows with new footage and an internal conflict for the half-shell heroes.

The trailer starts out on Halloween, with Michelangelo proclaiming it as “the one night of the year where we fit in.” His yearning to come out of the sewers continues throughout the trailer, increasing after the group hears about the “purple ooze” that can turn humans into animals. “We're turtles whether you like it or not,” Leonardo says, as Raphael starts to talk about the chance of becoming human. There’s also skydiving, explosive fights and, of course, Megan Fox’s April O'Neill:

Michelangelo, Donatello, Leonardo, and Raphael return to theaters this summer to battle bigger, badder villains, alongside April O'Neil (Megan Fox), Vern Fenwick (Will Arnett), and a newcomer: the hockey-masked vigilante Casey Jones (Stephen Amell). After supervillain Shredder escapes custody, he joins forces with mad scientist Baxter Stockman (Tyler Perry) and two dimwitted henchmen, Bebop (Gary Anthony Williams) and Rocksteady (WWE Superstar Stephen “Sheamus” Farrelly), to unleash a diabolical plan to take over the world. As the Turtles prepare to take on Shredder and his new crew, they find themselves facing an even greater evil with similar intentions: the notorious Krang.