Feature and short film selections for the 2014 Holland Animation Film Festival are announced, including Michel Gondry’s Is the Man Who is Tall Happy and Chris Landreth’s Subconscious Password.

Of more than 1,000 entries, the selections have been completed for the international competitions for features and shorts for the 2014 edition of the Holland Animation Film Festival. The Grand Prix awards will be presented on Sunday, March 23, the last day of the festival.

Eleven films have been selected for the international feature films competition, from romantic comedies and road movies to a documentary:

Is the Man Who is Tall Happy by Michel Gondry is an animated conversation with the famous linguist and political activist Noam Chomsky. In almost entirely hand-drawn animation Gondry illustrates  Chomsky’s words or rather, what he thinks Chomsky means. Fascinating, intelligent, not just for Chomsky fans.

Asphalt Watches van Seth Scriver en Shayne Ehman is a true story. A feature-length animation based on a real-life hitchhiking trip taken by the two filmmakers, Asphalt Watches details the hilarious and harrowing journey of Bucktooth Cloud and Skeleton Hat as they travel eastward across Canada in the summer of 2000.

Mait Laas from Estonia made a musical in stop motion: Lisa Limone and Maroc Orange: A Rapid Love Story. Maroc  is the brave hero-type, bound by prejudice and poverty. Lisa is the daughter of a rich businessman and tomato plantation owner. The harshness of the life of a refugee (Maroc) is in sharp contrast to the playful details and the cheerful fruit animation. 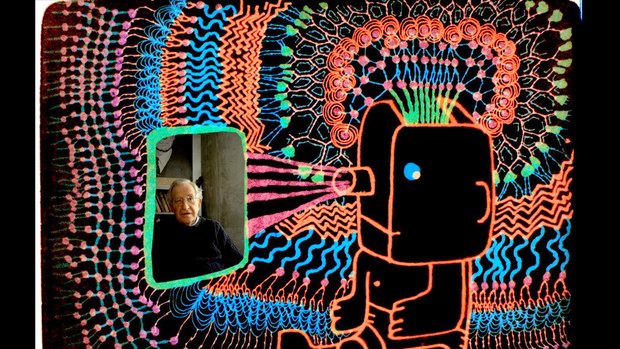 'Is the Man Who is Tall Happy'

A royal collection of 49 films from all parts of the world, including a large range of narrative and as many as 16 non-narrative films:

I Love Hooligans (Jan-Dirk Bouw): in this documentary we enter the world of a homosexual hooligan. Football is what he lives for. His sexual orientation is a well-kept secret and his love life had been relegated to the margin. Subconscious Password (Chris Landreth): a common social gaffe - forgetting somebody’s name - is the starting point for a mind-bending romp through the unconscious of Charles. Instant hit on several international festivals.