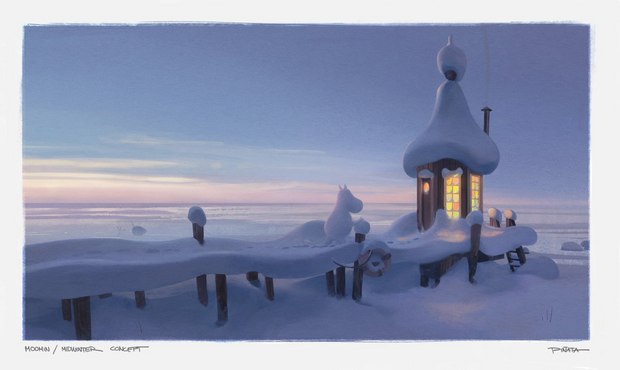 Finnish production company Gutsy Animations has launched a crowdfunding campaign to give thousands of Moomin fans across the world the opportunity to get their hands on some money-can’t-buy merchandise and once-in-a-lifetime experiences. The campaign is aiming to raise $200,000 towards the development of an innovative new television animation, which will help bring Moomin to a new generation -- and to our screens in a way never seen before.

The much-loved creation of novelist, painter, illustrator and comic book artist Tove Jansson, Moomintroll is one of Finland’s biggest cultural exports with the original books having been translated into over 50 languages and the previous animation broadcast in 124 territories.

The new animation series, The Moomin, will be made using a cutting-edge 2D/3D hybrid technique, where characters are rendered in 3D in an environment with some 2D illustrative or painterly elements. The very first visual concept from the animation has been released as a teaser to mark the launch of the crowdfunding campaign, with further concepts promised when the campaign reaches its US$200,000 target. The funds raised will contribute to the visual development of two series of 13 22-minute episodes, the first of which will air in spring 2019.

Fans are invited to be a part of the process and help make this new animation a reality by pledging a certain amount of money in return for specific “perks.” The perks on offer range from personal postcard updates from the production team to an all-inclusive trip to Finland during which superfans will be given a chance to visit the Moominworld theme park, Söderskär’s lighthouse and the Moomin Museum in Tampere. Other incredible perks on offer include a minor voice role and the chance to have your artwork incorporated into the animation in the form of a painting in the Moominhouse.

“Previous Moomin animations have been intended for young children but our aim is to create a series that is true to the spirit of Tove’s tales and appeal to the whole family,” Makaroff said. “We won’t shy away from the complexity and depth found in those original stories and the hybrid style of animation will be designed to achieve that. Using state-of-the-art CGI technology combined with more traditional hand-drawn techniques, we’ll follow Moomintroll’s emotional journey through the mysteries and wonders of Moominvalley.”

“Tove Jansson’s world of the Moomins is a rare and precious body of work which, like all great art, operates on many levels,” said Box. “My duty is to bring her vision to the screen and create a series of films that are beautiful, atmospheric, funny, thought provoking and poignant but, above all else, remind us of our own humble position in the world and our duty to be tolerant and understanding toward our fellow creatures, be they Moomins, Mymbles or Grokes.”

The animation is being developed with the full support of Moomin Characters, the business set up by Tove Jansson and her brother Lars to manage the Moomin brand. To this day Moomin Characters is run by family members with Sophia Jansson, Lars’s daughter and Tove’s niece, as Chairman of the Board and Creative Director. Sophia said: “Tove gave the inhabitants of Moominvalley the values of tolerance, love, respect, friendship and bravery – which are needed in today’s world more than ever. We’re very excited to have a wonderful team who shares these values bringing Moomin to life in a new way for fans young and old.”

The Indiegogo crowdfunding campaign kicked off on March 8 and runs through Friday, April 7. For more information on The Moomin, and to contribute to the campaign, visit www.igg.me/at/moomin