Animated comedy follows the antics of two cousins who go to great lengths to out-prank each other with hilarious and outrageous results, with audiences voting for favorite characters, pranks and videos. 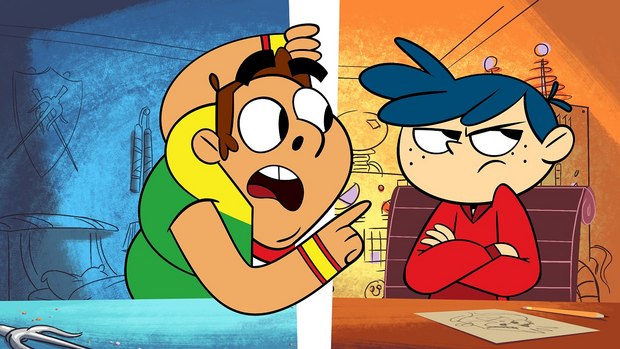 Toronto, ON -- Guru Studio announced the launch of Nemesis, a new Bell Media Fund pilot launching on TELETOON.com, April Fools' Day. The animated comedy follows the antics of two cousins who go to great lengths to out-prank each other with hilarious and outrageous results.  Nemesis goes beyond traditional viewing into active participation, where audiences can vote for favorite characters, pranks and videos. The new TELETOON original premieres April 1 in both English and French.

Nemesis stars Blade and Josh, cousins who have been in the same class since kindergarten. Back in the day they were the best of friends. Then one day the “incident” happened…and everything changed. Now they are each others' worst archenemies. They can’t even stand being in the same room together, and they wage daily prank battles of EPIC proportions! Nobody can remember the exact details of how it all kicked off but Blade and Josh are both certain that the other guy started it. What began as a difference of opinion has blossomed into a full-scale prankapalooza!

The launch on April Fools' Day was chosen to celebrate the timeless ritual of playing practical jokes.  Marketing for Nemesis will use social media around April Fools' Day buzz through various platforms engaging people to rally against the traditional cut off of 12:00PM for pranks. Additional promotional support from TELETOON and Guru Studio during the month of April will include on-air promotion, digital advertising, social media and promotional events.

“It would be like really awesome if April Fool’s Day could be extended to 24 hours, or even to infinity so I could prank Josh forever,” said Blade, co-star of Nemesis.  “I don't need 12 hours a  year to make Blade look like a gomer, I'll never stop, no matter what the prank law says,” said Josh, co-star of Nemesis.

Nemesis is a Bell Media Fund animation project in partnership with Guru Studio and TELETOON.