Netflix original preschool series is produced by Guru Studio in collaboration with Pharrell Williams’ i Am Other, iconic artists FriendsWithYou, and Home Plate Entertainment. 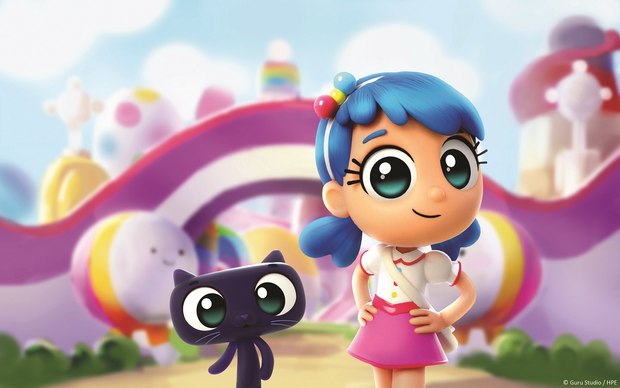 Guru Studio has named Toy State as its master toy licensee for the new highly-anticipated Netflix Original preschool animated series, True and the Rainbow Kingdom, which premiered globally on Netflix on August 11th. The deal was brokered by Guru’s licensing agency, Brand Central.

Toy State will help bring to life the new Netflix series through a robust product line featuring figures, role play, plush, playsets and dolls, marking a major expansion into new product categories and part of the company’s overall global growth strategy. The company plans to utilize their knowledge and decades of expertise to expand their success to a wider range of toy categories.

“Audiences will quickly fall in love with True and the Rainbow Kingdom, and we’re elated to be partnering with Guru Studio to create an innovative new toy line with the same magical quality that makes the series so special,” says Toy State president Andy Friess. “We’ve long been category leaders at retail, and we’re excited to be delivering toys inspired by the worlds of play and imagination found in True.”

True and the Rainbow Kingdom is a Netflix Original preschool series produced by Guru Studio in collaboration with Pharrell Williams’ i Am Other, world-renowned iconic artists FriendsWithYou, and Home Plate Entertainment. The first season premiered to a celebrity packed screening, including Pharrell Williams, Kelly Rowland and Tyga on August 10th, 2017 in Los Angeles. The second season is already underway and will be launching early 2018. The series follows our intelligent and fearless heroine, eight-year-old True, and her hilarious best friend Bartleby the cat, as they come to the rescue of Rainbow City’s whimsical citizens.

“We are thrilled to have such inspired and committed partners on board to help bring this exciting new brand into the world of physical play!” says Mary Bredin, Guru Studio’s EVP of content & strategy. “Toy State brings fresh ideas and innovative technology to traditional play patterns.”

Toy State will be providing an exclusive preview of the lineup inspired by the show to attendees of the Fall Toy Preview this October in Dallas, Texas. The first wave of products is set to hit shelves in Fall 2018.