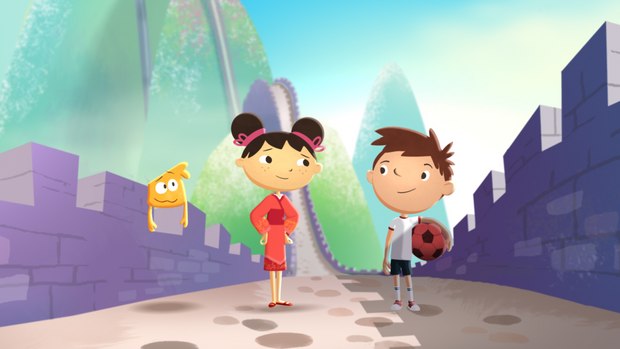 The agreement appoints Ciwen Media Group, the leader in the distribution and management of international animation properties in China, as exclusive representative of all broadcast, digital, licensing and publishing rights of Justin Time. The agreement is for mainland China, Macau, Hong Kong and Taiwan, for both English and Chinese language rights (including Mandarin, Cantonese, and other Chinese dialects).

“We are delighted to be joining forces with such a highly respected and well known agency in this important market,” adds Mary Bredin, Senior Vice President of Guru Studio. “Having a solid foothold in China is yet another step towards establishing Justin Time as a truly global brand, and we feel confident that Ciwen is the ideal partner to bring Justin Time to Chinese kids and families.”

Justin Time has firmly established itself as a highly successful and coveted show, airing in over 75 countries on the industry’s leading entertainment networks, with ancillary rights managed by top agencies including Knockout Licensing (US), RTL Licensing (Germany) and Kaynak (Turkey). The show, which has received over 10 industry Award nods including one Emmy and six Annie nominations, has a third season in development.

Based in Beijing, Ciwen produces and distributes media content including TV dramas and motion pictures, and is one of the biggest animation rights holders in China, with more than 3,000 episodes of the best in kids and family animated programming from around the world. The company has recently launched a Video-on-Demand (VoD) service, BuddiesTV, targeting kids in China. BuddiesTV is currently available across most streaming platforms with partners including iQiyi and Tencent Video (online streaming), BesTV (IPTV) and Xiaomi Media Box in mainland China, Macau and Hong Kong. It is also accessible via iOS- and Android-based apps. Guru’s Justin Time will be featured on BuddiesTV and will be available to large numbers of kids and families in the Chinese audience.

Sean Chu, Vice President of Ciwen Media Group, said, “Ciwen Media Group has taken the lead in China for introducing classic animation properties to Chinese kids and their families.  Our approach is to take world-class programs and characters and construct a comprehensive plan for their distribution across China through the traditional channels such as broadcast, DVDs, print publishing, toys, apparel and accessories, but also through emerging digital platforms such as BuddiesTV, VOD, e-publishing, and content for mobile devices and tablets. Justin Time is terrific property which we believe has the kind of universal and enduring appeal that will make it a favorite of Chinese kids and their families.”