In his Annecy 2021 reveal, the Oscar-winning director and his filmmaking team talk about their upcoming animated feature, the DreamWorks’ ‘Trollhunters’ franchise finale, premiering July 21 on Netflix. 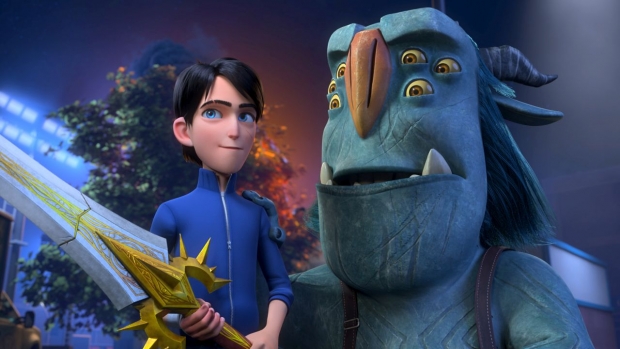 According to Oscar-winning director Guillermo del Toro, we’re in for something special come July 21, 2021. Besides heat and humidity. July 21 marks the Netflix premiere of his upcoming 3DCG animated feature film, DreamWorks’ Trollhunters: Rise of the Titans, which brings together heroes from his three hit animated Tales of Arcadia series - Trollhunters, 3Below, and Wizards - into one awe-inspiring franchise finale.

It was announced last August that del Toro and DreamWorks Animation were continuing to expand their ambitious Trollhunters world and partnership with a brand-new animated feature set in the Emmy Award-winning Tales of Arcadia world that has been entertaining audiences across the series’ 88 episodes that launched on Netflix in December 2016.

Winner of five Annie Awards, eight Emmy Awards and three Kidscreen Awards, the science fantasy adventure was initially developed as a live-action feature but, for budgetary reasons, eventually became a novel, “Tales of Arcadia: Trollhunters,” which was picked up by DreamWorks and Netflix on its way to becoming an animated TV series trilogy, and now a feature as well.

In the film, Arcadia may look like an ordinary town, but it lies at the center of magical and mystical lines that makes it a nexus for many battles among otherworldly creatures including trolls, aliens, and wizards. Heroes from Trollhunters, 3Below, and Wizards team-up in their most epic adventure yet where they must fight the Arcane Order for control over the magic that binds them all.

According to del Toro, the idea for Trollhunters came about after spending hours exploring the tunnels and sewers in Guadalajara. Though he never found trolls or goblins, he did find the imagination to create a world of magic that sought refuge underground, to which Velasco added, “Maybe going through the sewers is a Mexican thing. I did the same thing when I was a kid.” Noting that “we learned more and more” over the course of the three series and film’s productions, del Toro explains, “We said, ‘What if we attempt to have three series that you can put together like a diorama, and then you see how on an early episode of Trollhunters, you’re going to see characters from Wizards, or the characters of 3Below, interacting?’ You’re going to be able to go back in and see certain episodes from the others’ point of view. That was very attractive. And then finish with a feature. It sounded really crazy. We were really careful with how we developed the assets and all that, but also in the storytelling. We were very careful.”

For Hammes, though production on the franchise has been complicated, including creation of literally thousands of assets, work has been “a labor of love,” learning from a master (del Toro) how to bring a character-driven story to life. “I think I can speak for all of us in that we came into this journey thinking we knew something about telling stories and about character, and then we met Guillermo and he basically retaught us everything we probably should have known from the beginning in a much more structured way. We all knew we were doing something special.”

“The battles had a certain scale,” del Toro says. “What we learned on Pacific Rim was how do you give scale on a fight. What are the rules? What don’t you do? The speed of the movement. The objects they hit. We always loved the character Gun Robot. We always wanted to do a movie about Gun Robot, so we had the chance to bring him in, in all his robotic glory for the battle on the bay, which is beautiful in scope.”

“Every act is action-packed,” Velasco adds. “And when I was doing these big battles, I was like ‘Thank god I worked with [del Toro] on Pacific Rim because it was the perfect school to pull this out of.” “Team Trollhunters committed, about a decade ago, to try and push the boundaries of 3D CGI animation made for TV,” del Toro concludes. “We made decisions from the get-go regarding every asset and every audiovisual decision.  We outlined a vast trilogy of interconnecting mythology and characters that we always hoped could culminate with a massive ‘all-stars’ reunion.  Fortunately for us, DreamWorks Animation and Netflix both shared the very ambitious notion of doing the three series, interwoven and then finishing off with a bigger, epic-sized feature film to top it all off.  We wanted the feature to improve and expand but to also deliver more scope, more spectacle- more emotion too.  We are very proud of the Tales of Arcadia and extremely eager to deliver this spectacular finale for the audience.”

Directed by Matte, Velasco, and Schmidt, Trollhunters: Rise of the Titans is written by del Toro, Marc Guggenheim and the Hageman brothers, Dan and Kevin, the Star Trek: Prodigy writers/producers who just inked a multi-year development deal with CBS Studios. The brothers also executive produce along with del Toro, Guggenheim, and Hammes.