The DreamWorks Animation adventure, coming to Netflix July 21, pits heroes from ‘Trollhunters,’ ‘3Below,’ and ‘Wizards’ against the Arcane Order in the franchise’s final battle for control over the magic that binds them all. 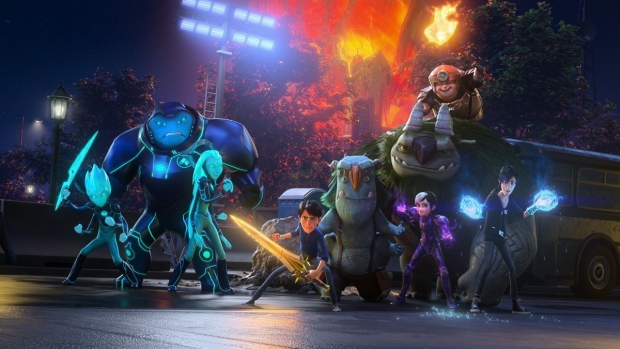 Winner of five Annie Awards, eight Emmy Awards and three Kidscreen Awards, the science fantasy adventure was initially developed as a live-action feature but, for budgetary reasons, eventually became a novel, “Tales of Arcadia: Trollhunters,” which was picked up by DreamWorks and Netflix on its way to becoming an animated TV series trilogy, and now a feature as well.

In the film, Arcadia may look like an ordinary town, but it lies at the center of magical and mystical lines that makes it a nexus for many battles among otherworldly creatures including trolls, aliens, and wizards. Heroes from the three series - Trollhunters, 3Below, and Wizards - team-up in their most epic adventure yet where they must fight the Arcane Order for control over the magic that binds them all.

In the clip, as Douxie (Colin O’Donoghue) attempts to hide Nari (Angel Lin) from the evil Bellroc (Kay Bess) and Skrael (Piotr Michael), a war between magic and mankind is unleashed.

Since 2016, del Toro and his creative team have built a rich and emotional narrative while continually advancing the shows’ technical achievements. “We always hoped these three series could culminate with a massive ‘all-stars’ reunion,” del Toro says. “We wanted the feature to improve and expand but to also deliver more scope, more spectacle … more emotion, too. We are very proud of the Tales of Arcadia and extremely eager to deliver this spectacular finale.”