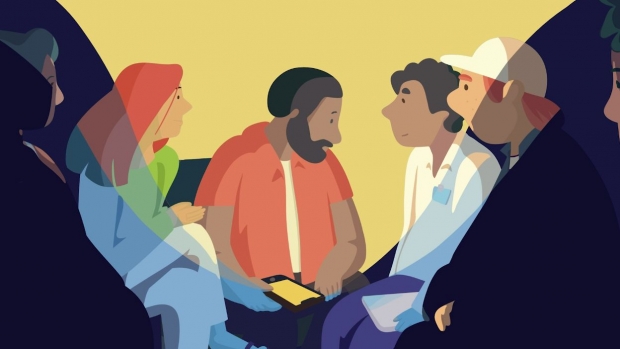 Bent Image Lab has just shared with AWN their new PSA, Guiding Light, produced for the Ad Council and United Way to raise awareness for 211.org. Fresh off directing animation for David Oyewolo’s first feature, The Water Man, Chel White was tapped by Bent Image Lab to direct the 2D animated spot, produced with the Walton Isaacson agency for the 211.org promotional campaign.

The spot tells the story of resources available from the 211.org network.  Told in a sequence of one-shot chapters, each chapter consists of a transition from muted blue and gray tones to a full range of bright and cheerful colors, visually representing people in at-risk situations that then get the help they need through community support; a food insecure family is provided with sustenance, a troubled man finds help in a support group, and an isolated, elderly woman gets assistance from medical professionals.

Take a look moment and check out Guiding Light:

The concept drawings were done by Danny Popovici; Baris Alten and Camille Vincent worked together for eight weeks using Toon Boom to create the animation. Wanting to capture the feeling of relief and optimism as the weight of fear and isolation is lifted from people represented in the short, the team showed light moving across the frame, opening up to reveal important resources and support.

Known for expertise in animation produced for brands such as Nike, AT&T, Starbucks, Coca Cola, MasterCard, and Office Max as well networks like CBS, Hallmark TV, and Cartoon Network, White and Bent wanted to provide support for Walton Isaacson’s LA office, the Ad Council and United Way in the effort to expand assistance for those affected by the COVID-19 pandemic.

“There’s something deeply satisfying about creating a project that is both beautifully crafted and in service of a worthy cause,” said White. “It’s a win-win for a director like myself and my crew at Bent Image Lab. Linking arms with the creative team at Walton Isaacson, we were able to create something eye-catching and unique that ultimately plays a critical role in providing everyday people with information and referrals to health, human, and social service organizations.”