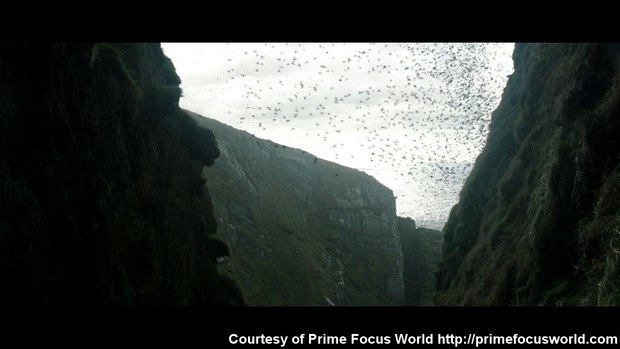 Developed in production for productions and successfully used from TV series to CG and VFX feature films, projects Guerilla Render has been used on include Prime Focus World’s Total Recall, Dredd, Mirror Mirror and Byzantium, Onyx Films’ the Prodigies and Method Animation’s series The Little Prince.

Beginning in December, customers considering Guerilla Render have the opportunity to download the software upon registration directly on Guerilla Render’s website www.guerillarender.com. One free connected license of Guerilla Render V1.0 per IP is granted to registered users, commercial use included.

Lighting environment - Guerilla Render GUI is optimized for the look development and the lighting tasks. The renderer is perfectly embedded in the GUI.

RenderGraph - Work in a non-linear fashion using the RenderGraph. Always track the work you have done and replicate it easily.

Gather and render - Using Alembic files, gather the animations and simulations you have done in any 3d package compatible with Alembic. Render everything together and simplify your pipeline.

Unbiased path tracing - Guerilla Render uses an unbiased path tracer to render the scene. You can validate shots with fast preview renders and be sure the final renders will be the same, with less noise.

Lights and Environment Shaders - Guerilla Render is shipped with a large choice of lights and environments for all kind of situations. Lights can have various shape and can contain multiple clipping volumes like cones, cylinder, frustum...

Fine control - Guerilla Render gives you a professional level of control of your render. Light/shadow/trace linking has never been so simple and powerful. The image sampling can be controlled at every step.

Outputs - With Guerilla Render, you have a total control on your render files, render passes, render layers and AOVs. All of which are rendered at the same time.

SDK - Using the provided SDKs, you can customize even more Guerilla Render and make it fit your pipeline easily.

Speed - Guerilla Render is designed around a unique raytracing technology which fully takes advantage of the CPU computing resources and lowers the memory bandwith to deliver the best possible performances.

Memory - Guerilla Render deals everyday with huge production datasets. It supports massive texture loads, can render hundreds of output images at the same time and raytrace hundreds of millions of polygons or curves.

Autodesk Maya - Guerilla Render is shipped with a professional Maya exporter, able to bake every kind of geometry and animations.

OpenEXR - Guerilla Render reads OpenEXR HDR images and writes OpenEXR files with a single or multiple images in each file.

Renderman shading language - Use in any shading network SLBox nodes, which uses a subset of the RSL to express shading expressions. No need to learn a new shading language.

RIB - Guerilla Render internally uses RIB files to send the jobs on the render farm. Render Wranglers can inspect those files and modify them. You can also render custom RIB files in Guerilla.

Fur Procedural - Guerilla Render can generate curves on any surfaces. It is easy to add grass or fur on any static or moving objects. A lot of attributes can be used to control the shape of the hairs, the density or the wind...

Renderfarm Pipeline - Guerilla Render directly communicates with your renderfarm manager. It generates the jobs and submits them on the farm, with a single click.