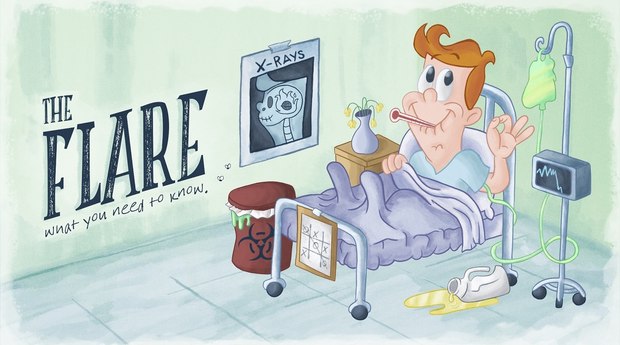 Winfield, IA -- An altruistic organization like WCKD, which plays a critical role in Maze Runner: The Scorch Trials, would be concerned about a deadly new virus jeopardizing public health, right? That is the premise behind a new faux public service announcement, created with help from Grasshorse Studios, which encourages you to rat out your friends and loved ones on social media.

As a gift from 20th Century Fox to their fan base, this short explores the Maze Runner world. Maybe WCKD is genuinely concerned about public health – or maybe the animation runs counterpoint to an insidious message WCKD is slipping to the public. Midwest-based Grasshorse Studios provided character animation in partnership with Concept Arts’ creative direction to market 20th Century Fox’s upcoming release.

Creating a classic-style character animation associated with a live action feature is a unique approach that stands out from the standard movie trailer. This video was inspired by vintage PSAs, and present day pharmaceutical commercials mixed with World War II era propaganda.

“As the piece developed we added more and more clues that WCKD may be lying. We imagined an editor making this video and trying to communicate ‘Don’t believe this!’ to the public. He adds subliminal messages that don’t jive -- kind of like the promise that WCKD will make it better if you report in for treatment for these alarming symptoms,” says Director Steve Jennings. “That’s what was so attractive about this project to us. Who wouldn’t want to make a mildly subversive propaganda piece? I’ve wanted to make something like this for years.”

“Every time we tweaked the script, Steve and I would look at each other and say, ‘Do you think we’ll get away with that?’” said Kathy Buxton, Producer. “Kudos to Concept Arts and 20th Century Fox’s marketing department for coming up with this novel and insanely hilarious concept.”

In the first movie, Maze Runner ends with the Gladers escaping the maze and being aided by paramilitary saviors. The Scorch Trials picks up where Maze Runner left off. The commandos, known as WCKD, claim to have created sanctuaries globally to shield people from the Flare, a deadly virus unleashed when the Earth was scorched by the sun. After escaping the maze, the Gladers look like they’ve finally caught a break. But that’s not the case.

Both Director Wes Ball and Screenwriter T.S. Nowlin returned for this second film in the trilogy based on James Dashner’s young adult novels.