Grasshorse Rolls Up Monster Video with Fitz and the Tantrums

Grasshorse Studios uses ToonBoom Harmony and open-source Blender to create a music video for the band’s new single, ‘Roll Up.’ 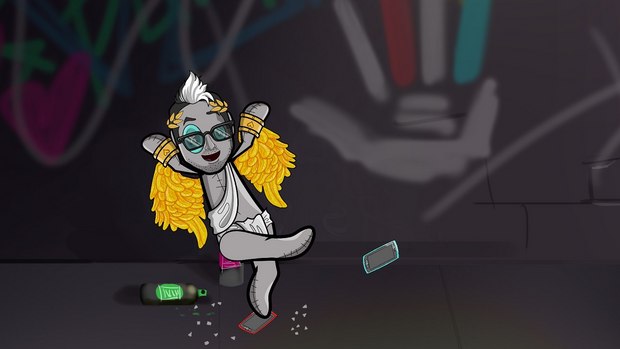 WINFIELD, IA -- One of the most exciting things about attending a Fitz and The Tantrums concert is the band’s energy compelling each audience member into motion. With the reputation of accepting nothing less than high energy response from their audience, imagine Fitz and Noelle singing to an audience of zombie faces lit from bluish-green cell phones. Now take a look at the band’s latest music video, “Roll Up,” animated by Grasshorse Studios.

The video opens in a world inter-populated with people and monsters. Michael “Fitz” Fitzpatrick, appearing as Cupid, resorts to drastic measures when his arrows lose their effect. The unfolding video is interspersed with performances by Noelle Scaggs as a lonely vampire and the other band members Joe Karnes, James King, Jeremy Ruzumna and John Wicks.

Fitz felt it important for this video to evoke the song’s lyrics of longing, desire and loneliness. It portrays barriers we raise between each other, whether they be cell phones, social networking or being too scared to dance. The barriers aren’t important. The isolation and damage they cause are.

When Fitz and The Tantrums approached Grasshorse to collaborate in making this animated video it almost seemed predestined. The character animation studio had previously created a mobile app as an outlet for kids to talk about issues they weren’t comfortable discussing in other ways. “It became the launching point for this video,” director Steve Jennings grinned, “a music video made of assets from a smartphone app warning people not to pay too much attention to smartphones. It seemed meant to be.”

Fitz and The Tantrums’ band members and Grasshorse’s crew share concerns about people not connecting -- for many reasons. Whether it’s because of technology, social anxiety or legitimate fears of being in public places.

It was important to the band that this video convey their deep sincerity and understanding about putting yourself out there. “They want their listeners to know we all feel like monsters sometimes,” said producer Kathy Buxton. “It’s okay to be a little wild. The fact that Fitz, Noelle and the band wanted to open themselves to the audience was no small decision. Fitz’ willingness to take on Cupid’s role was brave and took the video to a new level.”

Prior to being awarded the video, Grasshorse had already done research and development for character set-up that was going to be applied to a 3rd version of the app. By leveraging the assets, Grasshorse was able to start with a look and aesthetic and modify it. This allowed the studio to jump immediately into production while the individual character designs of Fitz, Noelle and the band were being completed. Grasshorse used both 2D and 3D pipelines using ToonBoom Harmony and Blender. All facial animation and character design was created in ToonBoom. Once complete, the animated sprite sheets were applied to 2D style animated puppet rigs in Blender. “When we had difficulty achieving a natural pose for a character, we illustrated the awkward elements and combine them with the animated rig,” said Jennings.

The original rig had color changing abilities for the skin and clothing as well as a more complex auto hiding line system. These elements were removed to streamline the rig and meet the deadline. It cut the sprite exporting time and volume by 75 percent.

As a studio, Grasshorse specializes in hybrid production utilizing 2D and 3D technologies. On first glance, it would appear this project should have been entirely created in 2D. However, Blender gave Grasshorse an advantage with its non-linear animation toolset. It allowed their 3D animators to focus on reusable cycles that could be used in multiple scenes. In turn, it allowed 3D character animation production while 2D character design and 3D character rigs were still being finalized. Blender’s nonlinear animation gave the studio the flexibility and capability of switching the dance cycles from the characters they were originally animated for to different ones. Separating the performance between 2D and 3D animators and delegating it generically allowed Grasshorse’s crew to create and animate many more characters than they have in the past.

“Typically for a three-and-a-half-minute piece we would have a maximum of four to five characters,” said Buxton. “We shattered that ceiling with a total of 17.”