Using a VR pipeline two years in the making, Mirada integrates live-action and CG in a first-of-its-kind interactive experience. 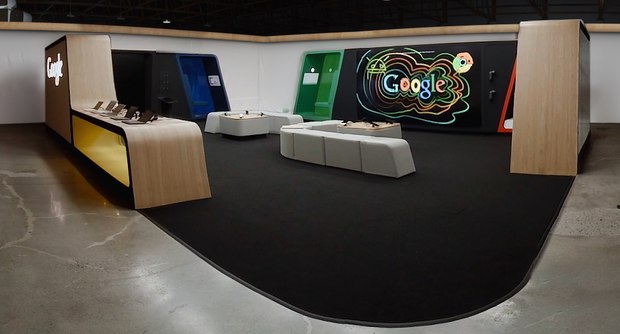 Los Angeles, CA -- For the launch of a new retail store concept, the Google shop, in-house agency Autofuss partnered with Mirada to introduce the store to the press before it was open to the public, using a unique interactive VR storytelling experience. The immersive app is available for Android. Mirada was enlisted to conceptualize, produce, and deliver an app that showcased the breadth of the Google shop,

Immersing users in the new retail space and allowing them to experience it for themselves, up close and personal. Director/Special Project Lead Andrew Cochrane headed the team for Mirada, in what is a first of its kind for the studio and for Google Cardboard.

During the user experience design phase, Mirada used rapid iterative testing to progress the technical development with message and story always the focus for the end product. The scope of the project encompasses a world-first seamless integration of live action video capture, pre- rendered computer graphics, and real-time rendered visuals and interactivity.

Valerio Poce and Rachel Halliburton in the retail engagement department led the project internally at Google.

Cochrane lead the technical and creative development for the app and explained, “Being charged with creating the first official VR app for Cardboard wasn’t just about pushing the hardware and technology as far as possible. Instead, it was about creating an immersive experience – telling the Google shop story through an intimate tour that offers a VIP sneak peek at the store before it is unveiled to the world. This was an exciting opportunity to use our skills and experience in storytelling to make something truly unique and deeply engaging.”

To capture the live-action component, Mirada collaborated with Jaunt, a technology company building the hardware and software to make truly immersive cinematic VR possible. The content was filmed using Jaunt’s proprietary 360 degree, stereoscopic 3D cameras, as well as 3D sound- field microphones, to put the viewers right in the middle of the scenes at a secure Google R&D facility in Mountain View, CA. The Jaunt platform makes use of advanced algorithms and computational photography software to enable the creation of seamless, omnidirectional 3D experiences. This was used to create the raw stereo-spherical footage for editorial and post- production at Mirada.

“We are very proud of this project, said Mirada President John Fragomeni, it is the culmination of nearly two years of R&D to build an industry-leading VR pipeline at Mirada, one that focuses on reliable workflows for shooting, editing, VFX, integrating CG, and finishing live-action stereo spherical video, to deliver top-tier content to this platform. This could not have been possible without the dedication of our talented special projects team and great partners in Autofuss, Google and Jaunt”.

The post-production and programming pipelines at Mirada managed over 6 terabytes of data to create an app for Android. Mirada’s artists edited, created a 3D environment for the Google Store to live in, and composited the CG and 360° video. The development efforts included working in Unity 3D, an interactive development platform, and the Google Cardboard SDK to integrate live action, CG, and real-time-rendered assets into an app that can run on a mobile phone. The team designed and animated in both pre-rendered and real-time environments, working with Google’s Material Design language to harmonize the physicality of the Google Store and the digital nature of the device used to experience it. To further the Googleyness of the virtual tour, a music composition by MuMo Production’s Lucas Vidal, sound editing by Source Sound, and sound effects were programmatically spatialized in the environment.

This marks the first time that Google has directly commissioned content for their Cardboard VR platform.

The result is a piece of truly immersive visual storytelling – one that invites the customer to experience the space before it exists; that invites and explains the range of offerings and shows the possibilities for the future. The Google shop is now open at Currys PC World in London, and will be expanding to Europe and eventually the rest of the world soon.