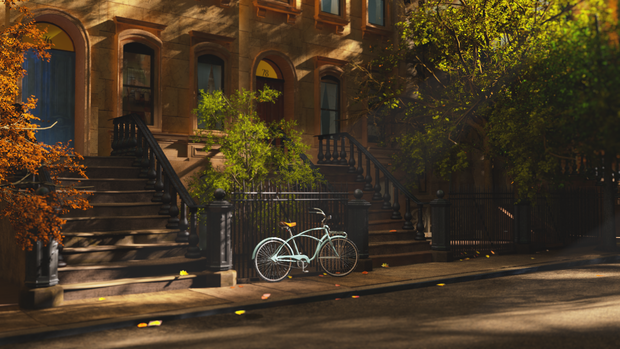 Based on the Google Cloud Platform infrastructure, Zync Render is a completely cloud-based rendering solution, enabling both fully staffed studios and individual artists to send render-intensive work to the cloud, where they can utilize the power and scalability of Google and receive high-quality results, fast.

Native Londoner Eva Ng is a freelancer whose offered her talent for CG lighting and compositing across the globe, contributing to a wide variety of projects. In 2012, she took a chance and moved to the bustling hub of Los Angeles to attend one of the most renowned visual effects and gaming institutions in the world, Hollywood’s prestigious Gnomon School of Visual Effects. Here, as a freelance lighting and compositing artist, she worked alongside award-winning director Joe Taranto, helping to create Monty and the Runaway Furnace, a film about a man who believes his furnace to contain the soul of his deceased wife.

This proved to be a fantastic experience for Ng and the development of her skills. However, with most of the production team based in Los Angeles, Ng had to drift between the US and Canada, meaning she found herself spending increasingly more time on planes, and struggling to find the time to render all her latest work.

“I only had a laptop to work on, and I faced weeks of render time for shots that were just a couple of seconds,” began Ng “It reached a point where I would spend my entire flight stressed, dreaming of a way to render while I was sitting on the plane.”

Ng continued to struggle with rendering times until she returned to Gnomon School of Visual Effects. When working on her render-intensive final project, NYC Village, she started looking for new ways to better empower her workflow.

“The NYC project was a tough one,” she began, looking back on the piece. Named NYC Village, the image is information heavy, but beautiful. It features a bike pitched up against the gate of a row house, shafts of dappled light piercing the lush green foliage. With all of the detail in the scene, it was predicted to take more than seven hours rendering time for just the foreground.

“The image was broken down into foreground and background render layers, but because I had trees in my scene it became very intense,” explained Ng. “When I did initial render tests the renders were coming in at over 18 hours on my Apple Macbook Pro Retina, as it only had 16GB of ram on 2.80Ghz i7. I cut down on all my render settings, geometry, shading, sampling; everything I could think of.”

Ng’s modest hardware was not delivering, and without access to the kind of supercharged hardware found in some of the larger VFX studios, Ng turned instead to her mentor at Gnomon in the hopes of finding a solution.

“I looked at all the options with my mentor, and Zync, with its cloud-based toolset, looked like exactly what I needed to complete my work with that combination of power and speed,” she says. “Zync was still in the beta stage at the time, and wasn’t due to be released until later that year,” remembered Ng. “I was so anxiously awaiting my invitation that I had already set up all my Google API’s and had my billing and account information ready for when it would kick in. When my invitation came through I was over the moon. I had watched the setup video for Maya many times in anticipation, and it really was so easy to get my project sent to the cloud server.”

While Ng had once spent 18 hours just to see one render of her final project, with Zync it took just four hours to render the background and foreground of her image respectively.

“I was immediately amazed by the power and time I had saved,” Ng reflected. “I could use that extra time for other developments and iterations, which would allow me to explore more options and get more creative.”

As Zync allows users to choose how many machines and cores they prefer, the rough cost for Ng’s selections were visible straight away. She also made use of the Zync Pricing calculator, which offers an estimate of how much a job might cost before commencing with the render.

“I also discovered in my account settings that I could set a price limit, just in case I was worried about going over my budget,” she remarked. “That kind of thing is really useful when you’re a freelance artist and you’re working on a budget.”

Another advantage that stood out to Eva was the ability to work on two projects at once, while still using the same piece of hardware. “I could send a project into the cloud to be rendered while I worked on another project. The rendering wouldn’t drain my laptop as it doesn’t use up local hardware resources, so I could work on two projects simultaneously, massively increasing my efficiency as a freelancer. That means more work, more income, and a happier client!

“Truly, Zync has made huge savings in cost and time for me, as I don’t have to invest in servers or powerful machines to handle my intense workload,” Ng added. “It’s so difficult to keep up with the costs of changing equipment and maintenance – especially if you’re a student or individual on a budget – so a solution like Zync is truly invaluable.”

Ng has been impressed by the speed, power, and efficiency of rendering in the cloud as well as the support she has received throughout the experience. When sending her first project to Zync, Ng realized her background render layer was returned incorrectly. She raised a ticket to the Zync support team, and experienced their speedy customer support. “I received world-class support from Zync’s technical support representative,” she explained. “As with any freelancer, completing work on time is really important, so I was thrilled when the entire technical support and engineering team got involved to help me. Their support didn’t feel generic like most other services I’ve experienced – I actually felt like I was working with their team to resolve the issue. I really want to thank the entire team who were behind all of the hard work.”

“For individual artists like me, it has allowed for the production of more diverse work in a shorter time frame,” she explained. “As technology continues to advance, with high quality images heading towards the 4K and 5K resolution, artists like myself are definitely going to need this powerful tool to cope with the demand. Not to mention that the 3D industry has become so remote with many offices around the globe, Zync might even start to help making savings on travel time.”

Ng believes that by offering the power of affordable cloud rendering to students and graduates, Zync has condensed their heavy workloads, allowing them the ability to streamline their workflow process with cutting edge results.

“It’s not uncommon to see students fighting for a computer to render at school,” she said. “Or, if the network was too busy we had to render locally, and that would become an issue for those working on heavier scenes. During those times, I would dream of a service that was this streamlined and user friendly, it would have come in so useful during finals and deadlines.

“Now that I have Zync Render it in my arsenal, however, I know I can tackle future projects, and build what’s next, with more confidence,” concluded Ng. “I’m totally over the moon with it.”