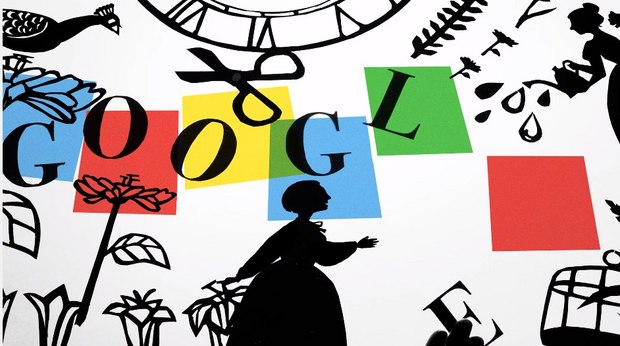 Here’s a treat! Today Google is celebrating what would be the 117th birthday of German animation pioneer Charlotte “Lotte” Reiniger, widely credited as the developer of the cut-paper silhouette animation technique, and the director of the first feature-length animated film, The Adventures of Prince Achmed, which was first released in 1926.

A retelling of The Arabian Nights, the 65-minute Prince Achmed follows a young prince who foils the plans of an evil sorcerer and falls in love with a beautiful princess against a backdrop of an epic battle between good and evil. Reiniger created all the animation for the film, making detailed black cardboard cutouts held together with wire hinges by hand and photographing each movement frame-by-frame on a multi-plane camera using a strong backlight. The final film, which took Reiniger and her partner, Charles Koch, three years to complete, contains a total of 96,000 frames.

The new Google Doodle pays homage to Reiniger’s work with a series of cutouts that nod to her work, which also includes the 1928 Dr. Dolittle, and the 1929 live-action feature, The Pursuit of Happiness, which starred Jean Renoir and Bertold Bartosch as a couple running a shadow-puppet theater in a carnival.

Born in Berlin in 1899, Reiniger began experimenting with shadow puppet productions while still in school, creating silhouettes to act out scenes from Shakespeare to entertain friends. She fled Germany with her husband Koch after the Nazis rose to power in the 1930s and they both eventually settled in England, where they both became British citizens. In addition to her feature projects, Reiniger animated dozens of fairy tale-based shorts for children, as well as a handful of short films for commercial clients including Pabst and Nivea. In her later years, Reiniger returned to her native Germany, where she passed away on June 19, 1981, at the age of 82.

Reiniger’s work continues to inspire generations of animators and filmmakers, including French animator Michel Ocelot (Kiriko and the Sorceress, Azur & Asmar), whose Tales of the Night was released in 2012, and the producers of animated series Steven Universe, which paid homage to Reiniger in the recent episode “The Answer.”

Take a look at the making of today’s new Google Doodle in the player below: