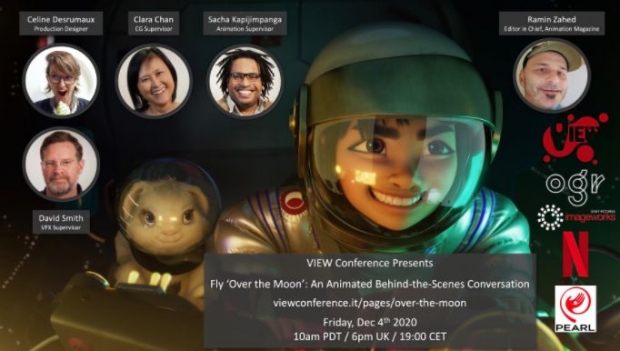 Send your questions for the panel to: info@viewconference.it

RSVP for the free event here.

Desrumaux has worked on numerous projects including Harry Potter and the Deathly Hallows: Part 1, Back to the Moon, Asterix, and Hotel Transylvania 3. She was nominated for an Annie Award in 2017 for her production design on The Little Prince. She worked with Google Spotlight Stories and Chromosphere on the John Kahrs animated short Age of Sail, which received both an Emmy and Annie Award in 2019 for her production design.

Kapijimpanga is an animation supervisor at Sony Pictures Imageworks. Prior to completing work on Over the Moon he supervised animation on the live-action Ghostbusters reboot, The Emoji Movie, The Smurfs 2, and The Smurfs: A Christmas Carol. He also served as lead animator Hotel Transylvania, The Smurfs, and G-Force. His other Imageworks credits include Alice In Wonderland; I Am Legend; Beowulf; Surf's Up; Monster House; and The Chronicles of Narnia: The Lion the Witch and The Wardrobe.

Smith is a visual effects supervisor at Sony Pictures Imageworks. He previously served as VFX Supervisor on The Emoji Movie and Storks and as digital effects supervisor on The Amazing Spider-Man and The Amazing Spider-Man 2. Smith has worked on multiple Academy Award-nominated features including The Chronicles of Narnia: The Lion; The Witch and The Wardrobe; Hollow Man; Stuart Little; and Starship Troopers. While at Imageworks, his credits included Eagle Eye; I Am Legend; Green Lantern; Cats and Dogs 2; Beowulf; Harry Potter and The Sorcerer's Stone; and Godzilla.