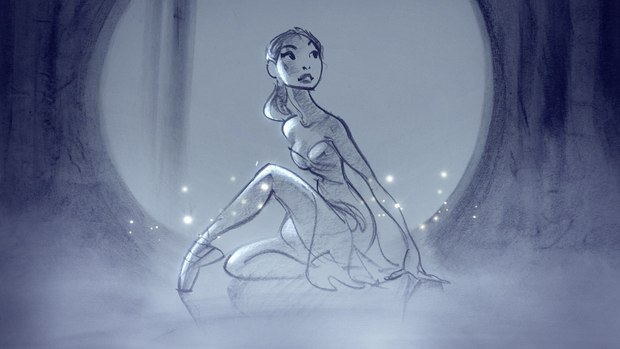 The On Animation blog has an excellent interview with legendary animator Glen Keane about his latest short film, Nephtali, which was created for the Paris Opera to coincide with September’s launch of their new digital stage, 3rd Stage (3e Scène, in French).

Keane was personally invited to join a distinguished list of artists and filmmakers to help launch 3rd Stage by Benjamin Millepied, the new Director of Dance for the Paris Opera. Benjamin and Glen first met while they were both working on projects at Google last year.

Nephtali, which refers to Jacob’s blessings and Psalm 42, was born from the comparison between the grace of a dancer and that of a deer. In a choreography which Glen created with dancer Marion Barbeau, he depicts the journey of a soul that is drawn towards a higher power, fights a struggle and is eventually liberated. By using both film and drawing, Glen and Marion manage to overcome the constraints of gravity and attain the freedom towards which a dancer’s body and spirit always aspire.

On working with Millepied:

“He was not trying to impose any kind of creative direction on it other than that we were passionate about what we were going to do. So I’ve always just been fascinated with dance. It always feels to me that dance is very much an animator’s…kind of like another way of expressing yourself through dance. Most of the time that I’ve seen dance in animation, I’ve never felt that it was really living up to the potential. It feels that we are often way too bound by gravity, and yet animation doesn’t have to be. So I thought I wanted to do something where I can really let the figure float in the air if it needs to be, and to really draw some of the fluidity of line that feels bound even by a real ballerina. The human figure is bound by gravity, and animation can really set that free.”

On Keane’s inspiration for the short:

On his creative process:

“As I was drawing Marion Barbeau and some of the other dancers, just watching them warm up, and as I’m sketching them warming up, I’m warming up myself and realizing how how much dance is very much a gestural, expressive medium. You are drawing a line of action from head to toe, and it’s very expressive. There’s a motion in those lines. As I worked with them throughout the next week, I found that working with a dancer is very much like working with an animator. They really truly were expressing themselves with their body, as opposed to me with my pencil. And they were really working towards silhouette, and all of the things that Frank Thomas, Ollie Johnston, Erik Larson were trying to drill into me, they were doing as well. They were trying to communicate with attitude, so that somebody in the back of the theater could read the pose. There was always an anticipation of movement…”

A 38-year veteran of Walt Disney Feature Animation, Glen Keane is most noted for creating and animating such legendary Disney characters as Ariel in The Little Mermaid, Aladdin, Pocahontas, the Beast from Beauty and the Beast, and Tarzan. Glen also served as Supervising Animator and Executive Producer on Disney’s 2010 box office hit, Tangled. In the spring of 2012, Glen departed Disney Studios in pursuit of further artistic exploration, stating “I am convinced that animation really is the ultimate art form of our time with endless new territories to explore. I can’t resist its siren call to step out and discover them.” In 2013, he launched Glen Keane Productions to pursue his personal projects. Immediately after launching GKP, he teamed up with Google ATAP (Advanced Technology and Projects) to create the acclaimed Google Spotight Story, Duet.

Head over to the On Animation blog to read the full interview.