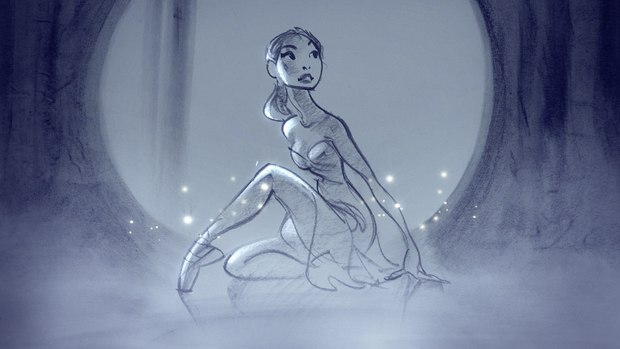 Glen Keane Productions has announced the official launch of Glen’s new film, Nephtali, which was created for the Paris Opera to coincide with Tuesday’s launch of their new digital stage, 3rd Stage (3e Scène, in French).

Glen was personally invited to join a distinguished list of artists and filmmakers to help launch 3rd Stage by Benjamin Millepied, the new Director of Dance for the Paris Opera. Benjamin and Glen first met while they were both working on projects at Google last year.

“We invited Glen Keane to come to the Paris Opera because he is one of the best artists in the world,” said Dimitri Chamblas, artistic director of the 3rd Stage of Paris Opera. “It was such a dream to have him working with the dancers to invent a story. He is first and foremost about the movement of his subject, and the very singular and fantastic way he transmits that movement through animation. Glen is a major artist and we couldn't imagine opening the Paris Opera Digital stage without having him on board.” The 3rd Stage’s spectators live all around the globe, speak every language, and love art in all its forms. Stéphane Lissner, Director of the Paris Opera, describes the 3rd Stage as an autonomous venue for digital creation to complement the Palais Garnier and the Opéra Bastille. “The aim of this digital 3rd Stage is to commission new works from artists through original pieces offering an original perspective on the world of opera, music, dance, our cultural heritage, the architecture of our two theatres and the skilled professionals working of the Paris Opera,” he says.

Glen is among 16 other top artists and filmmakers who were invited to create unique works for the debut of the 3rd Stage. The rest of the films can be seen at www.operadeparis.fr/en/3e-scene.

Nephtali, which refers to Jacob’s blessings and Psalm 42, was born from the comparison between the grace of a dancer and that of a deer. In a choreography which Glen created with dancer Marion Barbeau, he depicts the journey of a soul that is drawn towards a higher power, fights a struggle and is eventually liberated. By using both film and drawing, Glen and Marion manage to overcome the constraints of gravity and attain the freedom towards which a dancer’s body and spirit always aspire.

“It was a humbling experience for me to work as an animator in the Opera Garnier,” Kean said. “It is a palace steeped in the heritage of the craft and art of ballet. I was astounded by the expressiveness and power of the dancers I drew. There is a close connection between dance and animation. I was taught by my mentors at Disney to think in terms of "golden poses" that communicate the emotion and attitude of the character. I noticed in ballet the same use of these ‘golden poses.’ Working with ballerina Marion Barbeau I had the impression I was working with a great animator, only she expressed herself through her body's movements instead of a pencil... and with such rhythm and grace! I am truly grateful to Benjamin Millepied and the Paris Ballet for the invitation to step into their world and live my animation dream for a moment.”

A 38-year veteran of Walt Disney Feature Animation, Glen Keane is most noted for creating and animating such legendary Disney characters as Ariel in The Little Mermaid, Aladdin, Pocahontas, the Beast from Beauty and the Beast, and Tarzan. Glen also served as Supervising Animator and Executive Producer on Disney’s 2010 box office hit, Tangled. In the spring of 2012, Glen departed Disney Studios in pursuit of further artistic exploration, stating “I am convinced that animation really is the ultimate art form of our time with endless new territories to explore. I can’t resist its siren call to step out and discover them.” In 2013, he launched Glen Keane Productions to pursue his personal projects. Immediately after launching GKP, he teamed up with Google ATAP (Advanced Technology and Projects) to create the acclaimed Google Spotight Story, Duet.