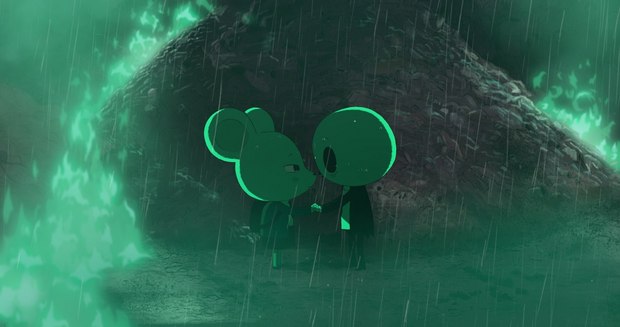 Independent animation distributor GKIDS has released a brand-new trailer and poster for Birdboy: The Forgotten Children, which opens in New York and Los Angeles on December 15th followed by a limited North American release.

The film, known internationally by its original Spanish title Psiconautas, los niños olvidados, is directed by Alberto Vázquez and Pedro Rivero, and is based on Vázquez’s graphic novel and award-winning short film, Birdboy. It was produced by Farruco Castromán, Carlos Juárez and Luis Tosar.

A darkly comic dystopian fantasy featuring adorable anthropomorphic critters, Birdboy: The Forgotten Children has been a hit on the festival circuit, with official selections including Annecy, BFI London, Fantasia (where it won the Satoshi Kon Award), and San Sebastian, among others. It took home Best Animated Feature at the 2016 Goya Awards, Spain’s equivalent of the Oscars (where Vázquez separately won Best Animated Short for his film Decorado), and was one of three nominees for Best Animated Feature at the 2016 European Film Awards.

GKIDS will release the film theatrically in both its original Spanish and a new English language version. Check out the new trailer in the player below:

Birdboy: The Forgotten Children is a darkly comic, mind-bending fantasy. Gorgeous graphic imagery brings to life a surreal and discordant world populated by adorable (and adorably disturbed) animated critters, searching for hope and love amid the ruin.