Animated feature directed by Adrià García and Víctor Maldonado with music by French composer Nicolas Errera was first released in the U.S. in 2014. 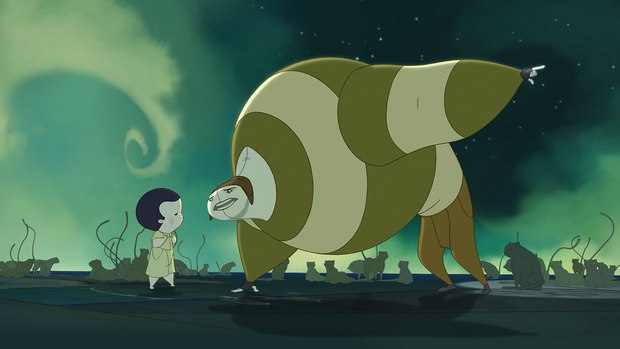 CHICAGO -- Cinema/Chicago and the Chicago International Film Festival are set to present the Chicago premiere of GKIDS’ Nocturna as the Opening Night film of their CineYouth Festival.

As an internationally competitive film festival for students ages 22 and younger, the 12th annual CineYouth Festival will premiere Nocturna Thursday, May 5th at 6:00PM at Columbia College Chicago (1104 South Wabash, 8th Floor in Chicago). The film runs 88 minutes, is in English and is appropriate for all ages.

Visually stunning and wildly inventive, Nocturna explores the mystery of the night in a sweeping nocturnal adventure full of Alice in Wonderland-like characters and moody, dream-inspired landscapes. Have you ever wondered why your hair looks funny in the morning or where the sounds outside your window come from at night? A young boy named Tim finds out after an unusual discovery on the rooftop of his orphanage plunges him into the secret world of Nocturna, inhabited by curious creatures who control the night.

There are hairdressers who specialize in bed-heads, dream writers, and a vast herd of guardian cats led by the gigantic Cat Shepherd. Yet this world is in danger: the stars in the sky are disappearing, kids are becoming restless at night, and a mysterious shadow creature is haunting the empty streets, extinguishing anything that gives off light. If Tim and the Cat Shepherd can’t set things right, nighttime will never be the same! Bold anime-influenced character design and beautiful, fluid 2D animation help to create a fantastic dream world that balances the magical with a touch of menace. Tim and the audience ultimately learn that the night doesn’t have to be so scary after all.

The screening will be immediately followed by a fun-filled reception that will include hot dogs, cotton candy, a button making station and more. Admission is free and open to the public. RSVP required by emailing cineyouth@chicagofilmfestival.com (link sends e-mail).

“We are so excited to present Nocturna as our Opening Night film this year,” said Rebecca Fons, CineYouth Festival Director and Education Director at the Chicago International Film Festival. “The film is delightful – I know families and film lovers alike will be charmed by the magic and imagination of the film, and we couldn’t be happier to present an internationally-made animated film to kick off CineYouth.” GKIDS is the leading distributor of top-caliber animated films from around the world. Nocturna was directed by Adrià García and Víctor Maldonado and the music by French composer Nicolas Errera and released in the US in 2014. This will be the film’s Chicago premiere.

Supported by Presenting Partners Bloomberg Philanthropies and Columbia College Chicago, CineYouth continues through May 7th with free film screenings of short films made by filmmakers 22 years old and younger.