Salma Hayek’s animated passion project based on the 100 million-selling masterpiece by Lebanese poet Kahlil Gibran is slated for a summer 2015 theatrical release. 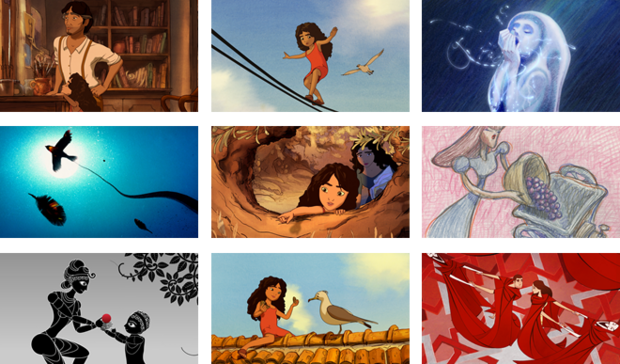 New York, NY -- Independent animation distributor GKIDS has announced its acquisition of North American rights to Kahlil Gibran's The Prophet, the animated feature produced and spearheaded by Salma Hayek-Pinault, based on the classic, internationally acclaimed and best-selling book by celebrated Lebanese author, Kahlil Gibran. The film was an official selection at Cannes, made its North American premiere in Toronto, and is slated for a summer 2015 theatrical release by GKIDS.

GKIDS made history last month as the only independent distributor to garner double Oscar nominations in the Best Animated Feature category – a feat the company has now accomplished twice – with A Cat in Paris and The Secret of Kells in 2012 and again this year with The Tale of The Princess Kaguya and Song of the Sea.

“After seeing the incredible reaction to the movie in Cannes, Toronto and Doha, I’m very excited to be working with GKIDS in bringing Kahlil Gibran's The Prophet to North American audiences,” said Hayek. “This is one of the most personal projects I have ever done and I am extremely proud of it.”

“We are thrilled to be working with Salma and the entire creative team to bring this stunning and deeply moving film to theaters,” said GKIDS president Eric Beckman. “The film’s message about freedom and the power of human expression could not be more relevant and timely.”

Inspired by the iconic book “The Prophet,” the film features a narrative story written and directed by Roger Allers (The Lion King), with individual “chapters” based on Gibran’s poems that were designed and directed by acclaimed animation directors from around the world, including Tomm Moore (Oscar nominee for The Secret of Kells and Song of the Sea), Joan Gratz (Oscar winner for Mona Lisa Descending a Staircase), Bill Plympton (Oscar nominee for Guard Dog and Your Face), Nina Paley (Annecy winner for Sita Sings the Blues), Joann Sfar (Cesar winner for The Rabbi’s Cat), Paul and Gaetan Brizzi (Fantasia 2000), Michal Socha (Chick) and Mohammed Harib (Freej).

Gibran's book is one of the bestselling books of all time, having sold over 100 million copies in more than 40 languages, since its original publication by Alfred Knopf in 1923.

Production took place in France, the UK, Ireland, Poland, Canada, and the US. The deal was negotiated by Eric Beckman from GKIDS and CAA for the filmmakers, following the film’s North American premiere at Toronto International Film Festival, with GKIDS acquiring North American theatrical, digital, home video and television rights. Wild Bunch is handling international sales.